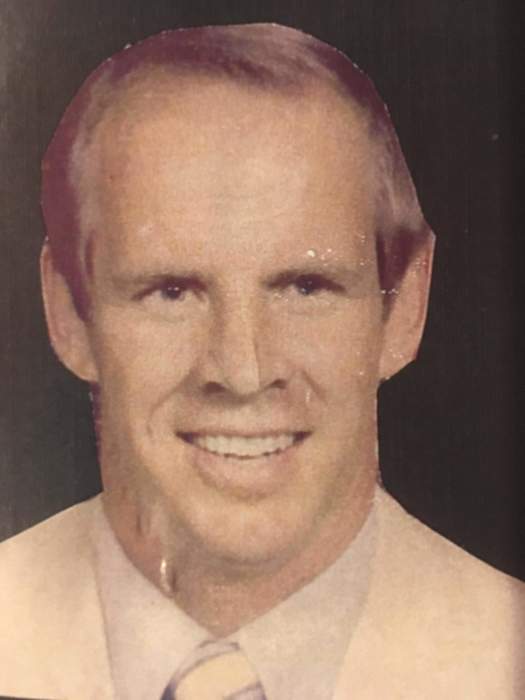 William "Bill" Max Linke passed peacefully into the arms of his Savior December 23, 2018 while residing at Glen Oaks Care in New London, MN.  Complications of Parkinson's disease ended his earthly journey. He was 82 years of age.

Memorial services will be held in May 2019 and his ashes will be scattered at that time in northern Minnesota.

Bill was born at Hartley Memorial Hospital in Battle Creek, Iowa April 22, 1936 to Max Fred William and Bertha Sabina (Miller) Linke.
He was baptized at Trinity Lutheran Church in Grant township in Ida county, IA.  Bill was confirmed in his faith at St Paul Lutheran Church, Ida Grove, Iowa.
Bill attended K-12 school in Ida Grove, IA.   As a senior he was named to the football All-Conference football team.  He received an athletic and academic scholarship to Drake University where he attended and served as captain of Drakes basketball team. He took great pride in the fact that he defensively held the great Oscar Robertson to the lowest scoring Oscar had during his entire college basketball career!
Bill and his high school sweetheart, Jerri Jean Cole eloped and were married in Ft. Lauderdale, FLA on July 3, 1956. Two children were born to this marriage: Lon L and Laura Leigh Linke.
After his 1958 graduation from Drake University, he enlisted in the USMC Officer Candidate School at Quantico, VA where he went through basic training and was commissioned a Second Lieutenant.  He later attended flight training at Pensacola flying out of Saufley and Whiting fields in Florida.  There he qualified in single and multi-engine, fixed wing and helicopter aircraft and carrier training.  Bill also obtained his commercial pilot's license while in the USMC.
In 1960 he was awarded his Naval aviation wings and commission as First Lieutenant..
While serving he was based in Hawaii and on the aircraft carriers Iwo Jima and the Princeton.
He flew helicopters serving on such missions as the ten Johnston Islands Nuclear Tests in the Pacific and was on the Iwo Jima as it headed for possible action at the time of the Cuban Missile crisis. After his active duty, he remained in the active reserve flying helicopters.  He retired in April of 1985 with distinguished service from the USMC with the rank of Lieutenant Colonel.
After his initial active military duty, Bill taught English and coached basketball (and other sports) at Willow (Quimby/Washta), Ida Grove, and then at Sioux City East High School...all in Iowa.
Although few knew, part of Bills training as a child was in music. He regularly played the families Hammond organ to relax and prepare mentally in preparation for basketball competitions.
Coach Linke had exceptional successes with his teams, not only as a coach, but as a mentor. He loved coaching but loved even more watching the young men with whom he was associated become successful people of quality and character.  Many of "his boys" honored him in his life by maintaining a caring relationship with him until his death.  In turn, he remembered each one of them, and their uniqueness, individually and collectively, with the greatest love and respect.
He studied and received his Master’s Degree in Educational Administration from the University of South Dakota during his time as an educator.
An avid fisherman from his youthful learning at the elbow of his beloved father in law, Jerry Cole,  he was at peace in the world of fish, bait, boat and water.  His children were the recipients of that love as his family spent many happy hours fishing with him through the years.
Later he worked in the insurance business and he and Jerri Jean owned and operated Park Lane Resort on Green Lake in Spicer, Mn from 1970 - 1982. At that same time, they also owned Kandi Realty in Willmar, MN.  Later, after selling that, he owned, managed and operated several other Century 21 real estate establishments in MN and Wisconsin and served also for a time as a District Manager.
After his marriage of 26 years ended in 1982, he married again in 1990 to Coleen Deardorff in Las Vegas, NV. That marriage ended in 2000. He returned to Spicer in his retirement and lived independently until he suffered a stroke and the debilitation of Parkinson's required his admittance to Glen Oaks in New London, MN.

Gratitude is expressed to the caring staff and volunteers at Glen Oaks who not only gave loving comfort and care but included him in their happy "family" during his years there.
May God bless the memory of Bill.............

To order memorial trees or send flowers to the family in memory of William Linke, please visit our flower store.