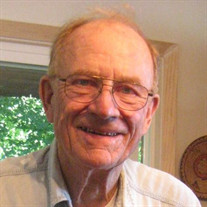 Memorial services will be 11:00 a.m. Saturday, October 1, at Faith Lutheran Church in Spicer.  Interment will be in the Spicer Family Mausoleum.  Visitation will be one hour prior to the service at the church on Saturday. Arrangements are with the Peterson Brothers Green Lake Funeral Home in Spicer.  (www.petersonbrothers.com)

William "Bill" Deming Latham was born on May 18, 1933, in Edina, Minnesota, the son of Paul W. and Eunice (Spicer) Latham.  He grew up in Edina and was known for his congeniality.  He spent summers and maintained his family's summer home on Green Lake, Medayto Cottage, also known as the Spicer Castle.  In his youth, Bill was active in the Boy Scouts of America and earned the Eagle Scout Award. In 1951, Bill graduated from Edina High School and in 1956, graduated from the College of Science and Engineering at the University of Minnesota, with a Bachelor of Mechanical Engineering and from the School of Business Administration with a Bachelor of Business Administration. During college, Bill was a member of Army Security Agency of the Army ROTC and upon graduation was commissioned as a Second Lieutenant.  He served in the U.S. Army for two years, helping with communications efforts during the Cuban Missile Crisis and Vietnam.  On July 20, 1963, at the Green Lake Bible Camp Chapel in Spicer, Bill was united in marriage to Ann Martha Hanson.  Bill worked as an engineer for Willmar Municipal Utilities in Willmar, Minnesota, then Franklin Heating Station in Rochester, Minnesota, from 1971 to 1980. When the family returned to Spicer, Minnesota, Bill and Ann started their own businessesa�"they owned and operated WaterCare of Willmar, Minnesota, and Wm Latham Real Estate of Spicer, Minnesota. At WaterCare, he installed and maintained water treatment products, and in their Real Estate business, he served as a realtor, broker, and appraiser. He later worked as a Certified Real Estate Appraiser and was employed by the Minnesota Department of Transportation (MN/DOT). Bill loved his work and always provided appraisal services.

Bill was also an inventor, an environmentalist, a visionary and always stayed up with the times.  He loved computers and could fix anything.  He was always positive and a gentleman. Bill had many passions and hobbies centered around his home on Green Lake, his woods and the farm. As a child, he and his three brothers enjoyed summers at the Spicer Castle swimming across the lake, waterskiing, sailing, fishing, hunting, raising honey bees, bottling and selling honey, making apple cider in their orchard, building a homemade diving bell out of washing machine parts, raising a pet raccoon, and a pig named Suzie that was allowed in the house and went for rides in the car. As an adult, he was active in keeping the world he loved as beautiful as possible for future generations (including his grandchildren) to enjoy. In this effort, Bill was one of the first presidents of the Green Lake Property Owners Association.  He worked with the Watershed District to minimize invasive species and devised methods to control them.  He worked with the forest service to encourage hardwoods to flourish in the woods, and enrolled his farm land in the Conservation Reserve Program (CRP).  With the help of his loving son, Judd, and countless friends, they planted over 5,000 trees, wildflowers, prairie grasses and food plots. Throughout all of his efforts, Bill never cared about being acknowledged or getting credit, he just wanted results. He also loved visiting his daughter, Hallie, and her family in Ireland, where he took over 2,500 pictures, and his recent visit exploring the mountains of Boulder, Colorado. Bill loved treating everyone to Green Lake adventures when they came to visit - teaching his grandchildren how to waterski, sail, fish, drive the boats, snowmobiles and ATV's, ice fish, and hunt. He especially loved spending time with his wife, best friend and soul mate, Ann Martha Hanson Latham. His memory will be cherished forever and he will live on through the many lives he touched.

He is survived by his loving wife of over 53 years, Ann Latham of Spicer; one son, Judd (and Dayna) Latham of New London; one daughter, Hallie (and Daniel) Latham-Timmons of Boulder, Colorado; five grandchildren, Sarah, Emma, Gabrielle, Tyler and Jessica; and one brother, Allen Latham of Spicer.

He was preceded in death by his parents; two brothers, Paul and John; two sisters-in-law, Mary Lou (Garvey) Latham and Marti (Scharmann) Latham; and a nephew, Paul Latham.

To order memorial trees or send flowers to the family in memory of William Latham, please visit our flower store.