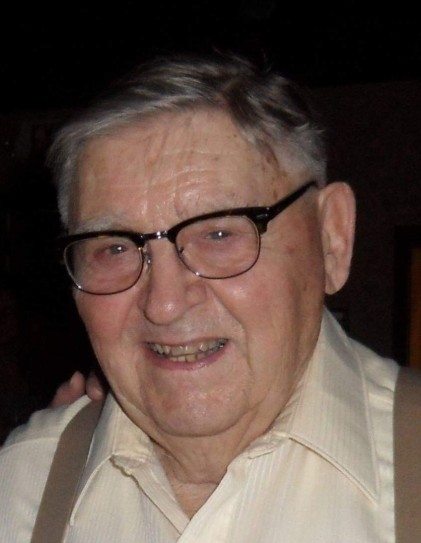 
Warren Robert Crackel was born July 4th, 1920 at Highmore, South Dakota to Elroy and Anna (Blaseg) Crackel, and lived on his family’s farm 14 miles south of Rue Heights, South Dakota.
Warren’s family moved to a farm by Sebeka, MN in 1936. Warren worked on neighboring farms as well as at home. In the fall of 1940, Warren worked for Pearson Farms as a farm hand until the winter of 1941 when he joined the Navy during World War II. He went to Farragut, Idaho for basic training and Great Lakes Basic Engineering Center on Lake Michigan where he received great grades. He then went to diesel engineering school at Gulf Port, Mississippi where he graduated at the top of his class. The Navy then sent him to Beloit, Wisconsin for advanced diesel engineering.

Warren was then sent to an outgoing unit at San Francisco, California, where he and his troop were put on a ship to Okinawa, Japan to the USS Enright APD 66 (a steam ship) as an engineer. The Japanese surrendered while he was enroute.

Warren was discharged from the Navy in June of 1946 and returned to work at Pearson Farms. Two years later he purchased equipment and went into business excavating until 1958, when his father died and he and his brother, Leroy, moved back home to the farm to support his mother.
While farming, he and Leroy also did wild rice harvesting. They had a band that played at dance halls and supper clubs in the Wadena-Sebeka-Brainerd area. Eventually, the farm was sold and Warren moved to Kabekona Lake and continued the music business in the Bemidji and Park Rapids area as well. They also bought a resort on the North Shore, which they sold when they couldn’t get enough well water.

Warren married Janice Jagush in 1976 to which one son, Daniel, was born. He also became father to Jeff and Jolene Jagush.

Warren was preceded in death by his parents, brothers: Herbert, Wilbur, Leroy and Lynn;  sisters: Katherine, Evelyn, Eleanore and Christine.

To order memorial trees or send flowers to the family in memory of Warren Crackel, please visit our flower store.