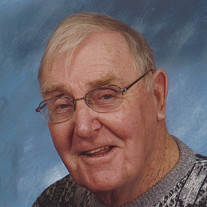 Mass of Christian Burial will be held at 10:30 a.m. on Saturday, April 22, at the Church of St. Mary in Willmar. Interment will be in the church cemetery. Military honors will be provided by the Willmar American Legion Post #167. Visitation will be one hour prior to the service at the church.

Virgil Wayne Wallin was born on November 24, 1926, in Willmar, Minnesota, the son of Maurice and Serena Grace (Palmer) Wallin. He grew up and received his education in Willmar. From 1944 to 1946, Virgil served in the U. S. Navy in the South Pacific. Following his discharge, Virgil returned to Willmar and began work with the Great Northern Railroad. From 1949 to 1952, Virgil served in the U.S. Army in Korea. Following his discharge, Virgil returned home and continued working on the railroad. On September 27, 1955, at St. Mary's Catholic Church in Willmar, Virgil was united in marriage to Mary Louise Burns and they made their home in Willmar. Virgil worked as a switchman and later a brakeman for over 40 years with the Great Northern Railroad, retiring in 1988. Virgil was a member of the Church of St. Mary, Knights of Columbus, American Legion and Veterans of Foreign Wars. Virgil loved the game of golf. He was a scratch golfer and achieved 2 holes-in-one. He also enjoyed fishing and traveling in his RV motorhome. Virgil and Mary Louise enjoyed spending their winters in Texas and volunteered to help children learn to read.

He was preceded in death by his parents and two brothers, Ronald and Maurice.

To order memorial trees or send flowers to the family in memory of Virgil Wallin, please visit our flower store.