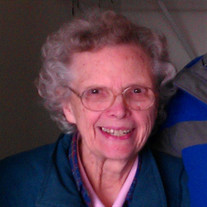 Funeral services will be held at 11:00 a.m. on Tuesday, March 14, at Nordland Lutheran Church, rural Paynesville. Interment will be at the Spicer City Cemetery. Visitation will be from 5-7 p.m. on Monday, March 13 at Peterson Brothers Funeral Home in Willmar and will continue for one hour prior to the services at the church on Tuesday. In lieu of flowers, memorials to the Nordland Lutheran Church are preferred. www.petersonbrothers.com

Evelyn Viola Gertgen was born on September 12, 1924, in Madison, Minnesota, the daughter of Olaf and Mabel Simonson. She grew up on a farm east of Green Lake and received her education in a one room school house and at Atwater High School. After graduating high school in 1942, Viola attended business college and worked for Gambles in the accounting department in Minneapolis. During the war, she moved to Seattle to be a "Rosie the Riveter" for Boeing Corporation. Viola later moved back to the farm and married Donald Gertgen on January 22, 1947. They lived in Willmar for the first 4 years of their marriage where Viola worked at the telephone company. They moved back to the Simonson farm and became engaged in farming,. The family later moved into Spicer and then to their farm five miles north of Atwater. They were active in farming for over 38 years. Besides being a mother, homemaker, and helping with farm chores. Viola also worked for Molenaar Plastics, Jennie-O Foods, and was self-employed doing house cleaning. In 2000, they sold the farm and moved into Willmar. Donald died in 2004. Viola remained in her home until 2014, when she moved into Bethesda Pleasant View. Her hobbies included crocheting and knitting, baking, gardening and canning foods.

She is survived by two sons, Dennis (and Donna) Gertgen of Elk River and Kevin Gertgen of Livonia, MI.; two Grandchildren, Dennis Michael Gertgen of Shakopee and Christine Marie (and Ray) Genthner of Asheville, NC., two great grandchildren, Chase and Paige Genthner, and one brother, Vance (and Carol) Simonson of Spicer, besides other relatives and friends.

She was preceded in death by her parents; her husband; one brother, Lowell and two sisters, Juliet and Delores.

To order memorial trees or send flowers to the family in memory of Viola Gertgen, please visit our flower store.