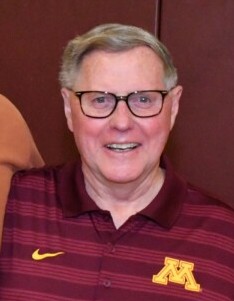 Surrounded by his loving family Thomas D. Corneil left our world to his heavenly home on December 18, 2020, just shy of his 76th birthday.  He died peacefully at the St. Cloud Hospital.  Describing all he was is nearly impossible to capture because he was quite a man. Although short in stature, he was bigger than life and embraced life to the fullest.  He had an unbelievable God given gift to truly connect with just about anyone, which is evidenced by all of the friendships he has developed and maintained. He is somewhat like the character Norm in Cheers…..almost everybody knows his name and will also have a funny story to tell about him.  He was witty and humorous (most of the time) and loved to laugh. He had the uncanny ability to remember minute details like temps and scores on game days and who was at a gathering, but he also remembered the big things like a friend’s birthday, cheering someone up, and reaching out to those in need. He was intensely loyal, kind, generous, and humble.  Unknowingly to most he lived courageously with cancer for 19 years.  He never let circumstances hold him back from living life. He said his motto was the “Golden Rule” and there is much evidence he lived by that.

Tom was born in Willmar, Minnesota on Dec. 29, 1944 to Vern and Lucille (Tweet) Corneil. Tom described his unselfish parents as providing a warm and caring home for him that didn’t have a lot of extras, but where the values of faith, generosity and a strong work ethic were instilled. They lived the principle to put God first and everything else will work out and passed that along to Tom.  He describes getting along most of the time with his 3 sisters in spite of their teasing and ganging up against him and his combat boots. He was glad to have a brother in Rody Young years later.

Tom graduated from Willmar High School in 1963 where he was a good student and active in a variety of activities in athletics and music.  As a high school student, he was a reporter and writer for both the high school newspaper and the West Central Tribune writing up by-lines under the guidance of Sports Editor Lefty Ranweiler.  He considered the possibility of a journalism career, but instead decided to pursue a math major at Bethel College where he remained a good student and continued his participation in baseball and choir.  Highlights were leading the baseball team and conference in hitting one season and a 6 week tour to Europe with the Male Chorus. Bethel students and faculty selected him for “Who’s Who,” a national listing of students who are outstanding in the areas of scholarship, leadership and educational, and extracurricular activities.

While in college he met the love of his life in brown-eyed Karen Fraunhofer. The fact that she could get Twins tickets when they played the White Sox may have also been a deciding factor in their courtship.  Tom, said in his (typically humorous) opinion, she made a good choice in Tom and they married in Chicago in 1967.  They were a perfect team and were married for 53 years.  He was a doting and loving husband and the best father any kid could ask for to David, Julia, and Jonathan.  He was their biggest fan in all they did in school, athletics, and activities.  He loved them fiercely and was immensely proud of each of them.  When beloved grandchildren came along he was filled with pride and loved each of them deeply. He was an extraordinary grandpa.  His qualities will live on in each of his family members.

Tom taught junior high math and coached baseball in Roseville at Fairview Junior High for 10 years.  Later it became his privilege to provide leadership at Corneil-Elkjer Insurance Agency, which his dad founded in 1942. A few years ago the agency was sold to North Risk Partners, but he remained working there until his retirement in 2019.  He believes he was gifted in building trusting relationships with a wide variety of people throughout life from the students he was privileged to teach & coach and then later for his customers for 42 years at Corneil-Elkjer Agency in Willmar.  Without a doubt he lived out his careers with care, integrity, and a strong work ethic.

Church has been an integral part of his whole life. First Baptist (later Refuge) became the foundation for his strong faith, life lessons, and life long friendships.  He was a leader in the church and served in a variety of roles throughout his adult life. He also was known to cause a bit of shenanigans and laughter in meetings, the pews, and on the stage.  He will be missed as a pillar in his church community.  In the greater Willmar Community he volunteered throughout his life, first as a youth and then when he moved back to Willmar.  Although he served on various boards and committees, Kiwanis was close to his heart because his values aligned with their mission.  An active member since 1984, he served as their president in 1991.

One cannot talk about Tom without mentioning his obsessive love of sports.  Watching and chatting about sports gave him great joy.  He was the ultimate super fan!  He loved local sports and MN sports primarily, but any good sports story or team piqued his interest. We would be remiss if we didn’t include Tom’s love of the maroon and gold and in particular MN Gopher Men’s Basketball.  He has been a hoops season ticket holder since 1973 and made numerous trips back and forth to the Barn.  Despite his love for so many teams, Tom was a Willmar Cardinal at his core. Tom has been an avid participant, spectator, or supporter of the Willmar athletic program for virtually his entire life.  His roles changed over the years, but his commitment to Cardinal Country remained faithful.  His contributions, investments, and belief in Cardinal athletes and the Cardinal athletic community are immeasurable and have left an imprint on the community. Due to this commitment, he was fortunate to be inducted into the Cardinal Pride Hall of Fame and soon after began serving on the board.

Dad wrote, “I don’t know if anyone could have been blessed with a better set of friends and family than me. So many have treated me kindly and I thank them at the same time.”  Colleagues, neighbors, students, customers, church members, fellow sports fans, and really anyone he came into contact with became a friend. He was an inspiration and has made such a lasting impact on so many lives.  The man, the myth (although he was no myth!), the legend, and close personal friend to so many will be deeply missed.  He will forever remain in our hearts. Heaven gained a great soul and faithful servant.

To order memorial trees or send flowers to the family in memory of Thomas Corneil, please visit our flower store.