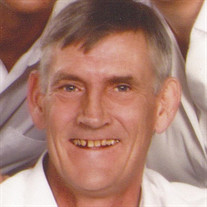 Funeral services will be held at 1:00 p.m. on Friday, May 11, at Peterson Brothers Funeral Home in Willmar. Visitation will be one hour prior to the service on Friday. Interment will be at St. Patrick's Catholic Cemetery near Kandiyohi.

Steven Delmer Schmidt was born October 22, 1960, in Windom, Minnesota, the son of Delmer and Evelyn Schmidt. He was baptized in the Lutheran faith in November 1960 and was confirmed in May 1975 at St. Paul's Lutheran Church in Montevideo. In 1979, he graduated from Montevideo Senior High School, where he participated in football and wrestling. On August 13, 1988, Steve married Patricia C. Norvell. They lived in Florida for several years before moving to Atwater. Steve was employed as a farm manager for Jennie-O.

Steve enjoyed being outdoors, landscaping and working on his yard. He especially enjoyed the time spent at the family farm. He was also a sports fan and enjoyed watching the Minnesota teams and continued his love of football and wrestling by following the ACGC High School teams. Steve was a kind and easy going person. He was loyal to his work, family and friends and enjoyed the simple pleasures of life.

He is survived by two daughters: Megan Schmidt (and Jesse Stueber) of Atwater, and Krystal (and Toren) Mohs of Devils Lake, ND; five grandchildren: Brooklyn, Teel, Paislee, Kysen and Greyson; his parents: Delmer and Evie Schmidt of Montevideo; a brother: Thomas Schmidt of Moorhead; three sisters: Jenielle (and Duane) Jensen of Montevideo, Stephanie (and Joe) Schultz of Montevideo, and Stacy (and Larry) Kruger of Ulen; many nieces and nephews and great-nieces and great-nephews; and other relatives and friends.

He was preceded in death by his wife: Patty in 2007; and his grandparents.

To order memorial trees or send flowers to the family in memory of Steven Schmidt, please visit our flower store.