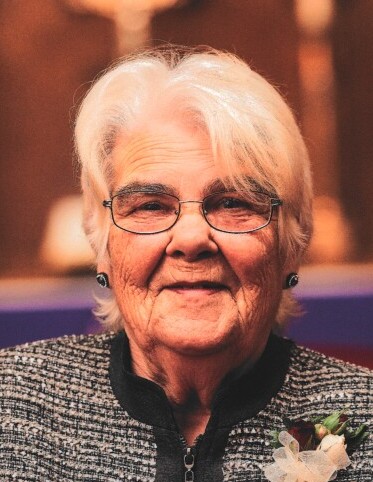 A celebration of life service will be held at 11 a.m. on Wednesday, Nov. 17, at Peace Lutheran Church in Cosmos.  Interment will be in the church cemetery.  Visitation will be one hour prior to the service at the church.  Arrangements are with the Peterson Brothers Atwater Funeral Home.  www.petersonbrothers.com

Sharon Lee Litzau was born on November 5, 1937, in Atwater, Minnesota, the daughter of Grant and Viola (Smoldt) Jackson.  She grew up in the Atwater community, attended country school and graduated from Atwater High School in 1955.  On July 12, 1956, Sharon was united in marriage to Richard Litzau in Colorado.  She was employed as the bookkeeper for their family business, Litzau Farm Drainage and also as a homemaker, taking care of their five children.

She loved her animals, the sheep, cattle, cats (Sparkie) and dogs (Bingo).  She enjoyed caring for her gardens, both flower and vegetable along with feeding and watching the variety of birds that visited the farm.  Sharon made the best cookies and coffee.  She had a beautiful whistle that will be missed.

We love you and until we meet again!

To order memorial trees or send flowers to the family in memory of Sharon "Liz" Litzau, please visit our flower store.