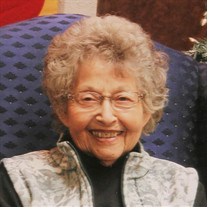 A Celebration of Life service will be held at 1:30 p.m. on Tuesday, Nov. 29, at the Cornerstone Baptist Church in Litchfield. Interment will be at Ripley Cemetery in Litchfield. Visitation will be one hour prior to the service at the church. Arrangements are with the Peterson Brothers Atwater Funeral Home.

Sally Louise Clark was on February 20, 1929, in Minneapolis, Minnesota, the daughter of George and Josephine (Randall) VanMeter. Sally grew up in Minneapolis and graduated from Central High School in 1947. She continued her education, graduating from Art School in Minneapolis. Sally then worked for the Soo Line Railroad for a few years. On July 12, 1952, in Minneapolis, Sally was united in marriage to Merlin Clark. They built a house in Glen Lake, Minnesota, on her grandparents homestead, where they raised their three boys, Jeff, Dave and Mike. In 1971, they moved their family to a farm on Peterson Lake, near Grove City. There they raised sheep, horses and dogs. Sally was very fond of animals, spending many hours with them. She used the animals for inspiration in her drawings, she was very talented in pen and ink, using the drawings to create greeting cards and selling them locally.

Sally was a member of the Cornerstone Baptist Church in Litchfield for the past 40 years and was very involved in all the churches activities. Sally loved people and never met anyone she didn't like.

Sally is survived by her three sons, Jeffrey (and Barb) Clark, of Veblen, SD., David (and Becky) Clark, of Grand Forks, ND., and Michael Clark, of Dallas, TX; five grandchildren, Marshall (and Kristen) Clark, Austin (and Alisen) Clark, Amber Clark, Josephine Clark and Ryan Clark and one great granddaughter, Marit Clark; besides other relatives and friends.

She was proceeded in death by her husband, Merlin Clark in 2003; her parents and two sisters, Joann Gonzalez and Mary Lou Meneely.

To order memorial trees or send flowers to the family in memory of Sally Clark, please visit our flower store.