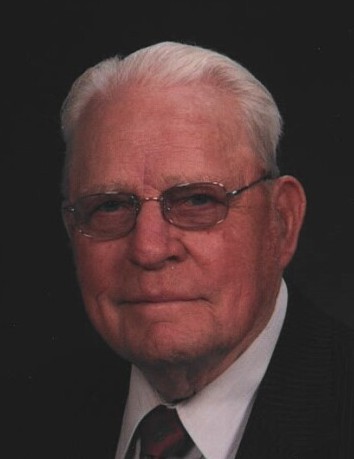 When Ruben was born July 16, 1922, his parents were farming his grandfathers farm near Pennock, MN.  After completing his education through the 8th grade, he was needed to help farm at home and neighboring farmers.  Prior to serving in the Army, he held several jobs, including farm worker, hauling gravel, working in a butcher shop and then was drafted in 1945.  After basic training, he spent most of his service in the South Pacific, Leyte Philippines, building roads and working on large equipment.  He received his honorable discharge with a presidential citation and war medals.  Ruben was very proud of his ability to have served his country.  He earned several medals while serving but because of a fire where the records were stored in Kansas he didn’t receive them until 2012.  They were a Good Conduct medal, the Asiatic Pacific Campaign Medal, the WWII Victory Medal, the Philippine Liberation Ribbon, the WWII Honorable Service lapel button and the Marksman Badge with Rifle Bar.   He was very involved with the American Legion, the Disabled American Veterans, served as commander of Chapter 34 of the Disabled Veterans, and was honored to be asked to speak during Memorial Day services.  Following his service time, Ruben worked for the Great Northern Railroad Mechanical Department in Willmar, owned and operated the Blacksmith Shop in Spicer, spent many years working in the construction business building roads in Minnesota, North Dakota and Wisconsin interstate systems.  Ruben was noted for his mechanical equipment work and was a state and federal certified welder.  He retired in 1984, after several years as the city engineer in Spicer, MN.  He also did a stint serving as Justice of the Peace.

Ruben married Vera Rud on August 23, 1941, and they celebrated their 76th wedding anniversary just prior to her death.  They were blessed with two children, Sharon and Charles.

Rubens passions were fishing, hunting, reading everything he could put his hands on, taking up golf after retirement and spending winters in Arizona.  He took pride in watching his garden grow and producing a bumper crops of apples, pears and raspberries.  He enjoyed having several articles printed in the Tribune about “the good old days” he called them.  He loved to cook, can venison, make jelly, making Swedish sausage and trying new recipes.  Woodworking presented another challenge, making sawdust was exciting.  After moving to Sunrise Village, he discovered puzzles, enjoyed visiting residents and staff at Pleasant View when Vera lived there.  His interests were endless.

He was preceded in death by his wife, Vera; his son, Charles; parents, Albert and Mabel Hoglund; one sister Florence (and Axel) Olson; and three brothers, Grant Hoglund, Raymond Hoglund and Willard (and Misty) Hoglund.

To order memorial trees or send flowers to the family in memory of Ruben Hoglund, please visit our flower store.