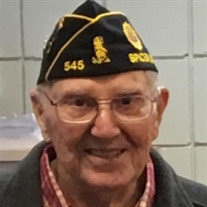 A Celebration of Life Service will be held at 11:00 a.m. on Saturday, Dec. 30, at the Green Lake Lutheran Bible Camp Chapel in Spicer. Interment will be at a later date in the Spicer City Cemetery. Visitation will be from 4-6 p.m. on Friday, Dec. 29, at Faith Lutheran Church in Spicer and will continue for one hour prior to the service on Saturday. In lieu of flowers, memorials to the Green Lake Lutheran Ministries are preferred. Arrangements are with the Peterson Brothers Green Lake Funeral Home in Spicer. www.petersonbrothers.com

Roy Vinton Eliason was born on January 20, 1927, in Glenwood, Minnesota, the son of Andrew and Anna (McMillian) Eliason.  He grew up in Glenwood, graduated from Glenwood High School in 1944 and was drafted into the U.S. Army Air Corps.  He served as a draftsman in Japan following the end of WW II.  In 1950, Roy graduated from St. Cloud State with a degree in teaching.  On April 13, 1951, Roy was united in marriage to LaVonne Monson at the Glenwood Lutheran Church in Glenwood.  He was employed as a teacher in Wabasso, Montevideo, Willmar and Mankato State University.  He pursued advanced degrees, completing his Masters from the University of North Carolina, and credits toward his Doctorate from UND. In 1965, Roy joined the Holt, Reinhart & Winston Publishing Company and worked as an editor and mathematics consultant.  He stayed at Holt for 20 years. While they maintained a summer home in Spicer, in 1981, they moved there as their permanent residence and he retired in 1985.  Roy was a former camp director and volunteer of Green Lake Lutheran Ministries, spending considerable time at all three properties.  He was a member of Faith Lutheran Church serving in many leadership capacities, a member of the Spicer Lions, and the Spicer American Legion Post.

Roy's hobbies included fishing, hunting and woodworking. He and LaVonne also enjoyed traveling in their RV throughout the United States and Canada, eventually wintering every year in Apache Junction, AZ. Roy was never one to not have some kind of project going on, either at home or at one of the camps. Of course, that always meant being able to have a break for coffee time. Roy passed on his high ideals to his family and those around him. His integrity was one of his highest callings. While LaVonne was being treated at Glen Oaks nursing home for her failing health and dementia, Roy would drive there twice a day to be with her and feed her for over three years. His family and faith were of utmost importance to him.

He is survived by two sons, David (and Elizabeth) Eliason of Spicer and Gary (and Barbara) Eliason of Northfield; six grandchildren, Peter (and Ana) Eliason, Ann (and Joseph) LaPorte, John (and Christina) Eliason, Erik (and Angela) Eliason, Joshua (and Katie) Eliason, Anna Eliason (and special friend, Sean Derry); six great grandchildren, Landon, Vera, Hans, Franklin, Elodie and Oliver; and one cousin, Bud (and Vivian) McMillian of Paynesville, besides other relatives and friends.

He was preceded in death by his parents; his wife of 64 years, LaVonne in 2016 and one brother, Norman.

To order memorial trees or send flowers to the family in memory of Roy Eliason, please visit our flower store.