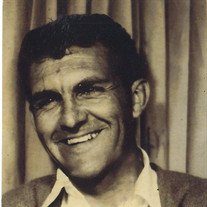 
A graveside service will be held at 10:00 a.m. on Wednesday, Sept. 12, at Fairview Cemetery in Willmar. There is no reviewal or visitation. Military honors will be provided by the Willmar American Legion Post #167. Arrangements are with Peterson Brothers Funeral Home in Willmar. www.petersonbrothers.com


Richard Larry Reigstad was born on April 7, 1935, in Willmar, Minnesota, the son of Elmer and Ruth (Cummings) Reigstad. He grew up in Willmar, was baptized and confirmed at Calvary Lutheran Church and received his education in the Willmar Public Schools. In 1952, Richard enlisted in the U.S. Air Force and served in France with the Air Defense Command and honorably discharged in 1956. In 1954, Richard was united in marriage to Thelma McCausland and they made their home in Willmar. In 1967, they were divorced and Richard moved to Minneapolis and worked as a crane operator in the highway and building trades. Since 1957, he has been a member of the Local 49 Operating Engineers Union, the American Legion Post and the 511 Aviation Club in Crystal, Minnesota.


He is survived by three children, Ricky (and Mary) Reigstad of New London, Ronald (and My-Le) Reigstad of St. Cloud and Tamara Sondrol of Shakopee; fourteen grandchildren and seventeen great grandchildren. Also surviving is one brother, Gary Stranberg of Minneapolis; and daughter-in-law, Patty Reigstad of Willmar, besides other relatives and friends.


He was preceded in death by his parents; one son, Jeff; one grandson, Thomas; two brothers, Danny (who was killed in action in Viet Nam in 1967) and Eugene; one sister, JoAnn; one nephew, Michael.


Richard wanted everyone to know... ."My sincere apologies to those I have offended along the way!  To those who've preceded me, I hope to see you all soon!  To my friends and family I leave behind, I'll see you all on the other side.  Good luck and farewell; be good to each other!".

To order memorial trees or send flowers to the family in memory of Richard Reigstad, please visit our flower store.