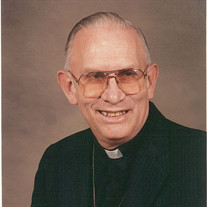 Funeral services will be held at 1:00 p.m. on Tuesday, July 19, at Bethel Lutheran Church in Willmar. Interment will be at St. John's Lutheran Cemetery in Raymond. Visitation will be from 5-8 p.m. on Monday, July 18, at the Peterson Brothers Funeral Home in Willmar and will continue for one hour prior to the service at the church on Tuesday. In lieu of flowers, memorials are preferred to the Ingham-Okoboji Lutheran Bible Camp (okoboji.org/) or the church of the donor's choice.

Frederik Vilhem Jensen was born on March 19, 1928, in Montreal Quebec, Canada, the son of John M. and Ragnhild E. (Gotsche) Jensen. He was baptized in the Christian faith at St. Ansgar's Lutheran Church in Montreal where his father was Pastor. In 1937, he moved with his family to Spencer, Iowa, where his father was called to be Pastor of Bethany Lutheran Church. Frederik confirmed his Christian faith on May 22, 1942, at Bethany Lutheran Church and in 1946, graduated from Spencer High School. In the fall of 1946, Frederik entered Dana College in Blair, Nebraska as a pre-seminary student and graduated in June of 1950. Later in 1950, he enrolled at Luther Theological Seminary in St. Paul, Minnesota and graduated with a Master of Divinity degree in 1953. From 1953 to 1954, he did post-graduate work at Princeton Theological Seminary in Princeton, New Jersey. On September 26, 1952, Frederik was united in marriage to Janice Ruth Nygaard and they were blessed with three children, Frederik, Marcia and Rhonda. Frederik V. Jensen was ordained into the Ministry of the Evangelical Lutheran Church on July 11, 1954, at Bethany Lutheran Church in Spencer, Iowa. He served as a Minister in the communities of New Denmark, New Brunswick; Montreal and St. Lambert, Quebec, Canada. In March of 1965, he was called to Minnesota and served in the communities of Evan-Gilfillan and Raymond. In March of 1981, he was called to Streator, IL until his retirement in 1991. In February of 1992, Frederik and Janice moved to Willmar where he was installed as Interim Pastor at Bethel Lutheran Church and from 1993 to 2010, he served as the Visitation Pastor at Bethel. He also served as a part-time Interim Pastor at churches throughout rural Minnesota, Wisconsin and Texas. On August 21, 2005, his wife, Janice passed away after almost 53 years of marriage. On April 14, 2007, Fred was married to Beverly Grace Dilger-Hanson. They enjoyed their aging years together and the new found fellowship with each other's children, grandchildren, relatives and friends. Beverly passed away on June 19, 2014. In addition to his work as a pastor, Fred enjoyed sports, especially ice skatinga�"playing pick-up hockey games when possible while in Canada. He also enjoyed tennis, golf, and was a fan of the Montreal Canadians and the Minnesota Twins and Vikings. As hobbies, Fred enjoyed oil and water painting, writing poetry, traveling with Janice and Beverly throughout the United States, Canada and Europe.

He is survived by one son, Rev. Fred (and Dawn) Jensen of Minnetonka; one daughter, Rhonda (and Dean) Anderson of Waterford, WI., seven grandchildren and five great grandchildren. Also surviving is one sister, Margaret Rasmussen of Lombard, IL., and one sister-in-law, Arlene Jensen of Palo Alto, CA., besides other relatives and friends.

He was preceded in death by his parents; both wives, Janice in 2005 and Beverly in 2014; a daughter, Marcia Hudak; one brother, Ronald Jensen and one brother-in-law, Bjarne Rasmussen.

To order memorial trees or send flowers to the family in memory of Rev. Frederik Jensen, please visit our flower store.