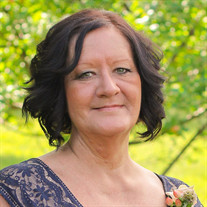 A celebration of life will be held at 11 am, Saturday, September 10, at Assembly of God Church. Visitation will be held one hour prior to service at the church. In lieu of flowers, the family requests memorials.

Rebecca L. (Allen) Mortensen was born on November 30, 1957 in Litchfield, MN, the daughter of Royce and Marian (Smith) Allen. She graduated from Grove City High School in 1975 and was involved in cheerleading, basketball and volleyball. Her nickname was "Spike."

Through mutual friends, she met Randall "Randy" Mortensen of Willmar in 1978 and they were united in marriage on May 5, 1979 at First Baptist Church in Grove City, MN. Randy and Becky settled in Willmar and announced the birth of their daughter, Leah, in December of 1987 and she officially joined their family through adoption in January of 1988 from Georgia. Their son Bryton would later complete their family, also through adoption, in May of 1995 from Louisiana. She was a very proud mother.

Becky served in the hospitality industry for over 30 years before transitioning to her most recent career as a paraprofessional for the Willmar Public School District. Becky cherished her career, the kids, worked without limitation and spoke fondly of her coworkers. She has a special love for classic rock, Moondance Jam, her "soaps" (Days of Our Lives, Young & the Restless), garage sales and spending time with her grandchildren. They brought her so much joy.

Although Becky is no longer with us on earth, we believe she fully lived and fought with grace against a disease much too powerful. We will miss her spunk, sense of humor, kind spirit and undefined love for those who touched her life.

She is preceded in death by her maternal and paternal grandparents; her father, Royce Allen; and two brothers, Kenneth and James Allen.

To order memorial trees or send flowers to the family in memory of Rebecca Mortensen, please visit our flower store.