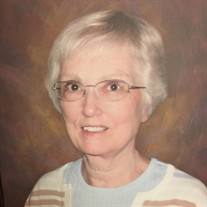 A Celebration of Life service will be held at 11:00 a.m. on Friday, September 23, at the Peterson Brothers Funeral Home in Willmar. Interment will be at Fairview Cemetery. Visitation will be one hour prior to the service on Friday. In lieu of flowers, donations may be made to the Alzheimer's Association (alz.org).

Patricia Marie Hadder was born on March 17, 1941, in Willmar, Minnesota, the oldest of three children to Sigurd and Maxine Pederson. Pat grew up in Willmar, graduated from Willmar High School in 1959 and later received her Associate Degree from the Willmar Junior College. Pat worked in office and clerical roles for the school system, Corneil-Elkjer Insurance Agency, First Baptist Church, and Quik Print, and as an independent Mary Kay dealer.

Pat married Edwin Hadder in July of 1982, in Willmar, Minnesota. Pat and Ed moved to Colorado Springs, Colorado in August of 2002. Together Pat and Ed enjoyed world travels to Korea, Norway, Australia and New Zealand. Often they volunteered together both locally and during the winter months in Texas with Wycliffe Associates and Rio Grande Bible Institute.

Pat was a kind, compassionate and gentle woman who gave of her time and talents to others, pursuing excellence in all she did. Her parents and her Norwegian heritage instilled in her the desire to prioritize family and extended family. Pat loved to visit with relatives and to organize family reunions. Throughout her life she served her family diligently. Flower gardening, sewing, and using her ideas and creativity to build, fix, and improve things brought great satisfaction and enjoyment to Pat. She was a proactive advocate for disabled children at county and state levels. Very involved with her local church in many capacities, Pat served and used her talents for God's glory. For several years Pat sang with a local traveling gospel singing group, the "Reflection-Aires". Pat enjoyed tennis, racquetball, and daily walks with friends.

She is survived by her daughter, Ronna (and Tim) Hoglund of Colorado Springs, CO.; two step-daughters, Patricia (and Ed) Leiter of Blanchard, MI., and Wina (and Mike) Preslicka of Northfield, MN.; eleven grandchildren and many great grandchildren. Also surviving is one sister, Carol (and Roger) Drye of Pensacola, FL., and one brother, Ron (and Miriam) Pederson of Grand Rapids, MI., besides numerous other relatives and friends.

She was preceded in death by her parents; her husband, Edwin Hadder, one son, Roger Pechacek, and a step-daughter, Sandy (Hadder) Thompson.

To order memorial trees or send flowers to the family in memory of Patricia Hadder, please visit our flower store.