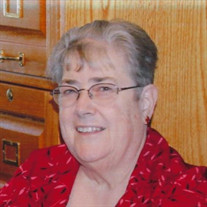 Funeral services will be held at 11:00 a.m. on Friday, May 5, at the Peterson Brothers Funeral Home in Willmar. Interment will be at Fairview Cemetery. Visitation will be one hour prior to the service. www.petersonbrothers.com.

Noreen Ardelle Nere was born on May 15, 1943, in Tyler, Minnesota, the daughter of Wesley and May (Fifield) Zvorak. She grew up in Russell, graduated from Russell High School in 1961 and attended the Willmar Community College. Noreen then began working at Pennock Oil Company as a bookkeeper. On April 18, 1972, Noreen was united in marriage to Marvin A. H. Nere. They lived in Minneapolis for a couple of years before moving to Willmar. Noreen worked for many years at Mary's Message Center and at Molenaar Inc. Her hobbies included reading, gardening and cross stitch. She enjoyed antiquing with friends, being with family and weekly excursions to Jackpot with Marvin.

She is survived by her loving husband, Marvin of Willmar; two nephews, Tom Piehl of Perham and Greg (and Pam) Piehl of Hector and two nieces, Lynn (and Bill) Serra of Nisswa and Shelley (and Bruce) Shearer of Las Vegas, NV., besides other relatives and friends.

She was preceded in death by her parents and one brother, Merlin Zvorak.