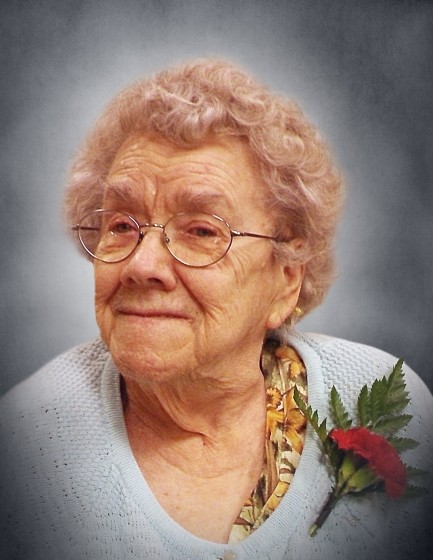 Funeral services will be 11 a.m. Saturday, October 13, at Svea Lutheran Church.  Interment will be in the church cemetery.  Visitation will be 5-7 p.m. Friday, October 12, at Peterson Brothers Funeral Home in Willmar and will continue one hour prior to the service at the church.

Millicent Lucile Johnson was born January 21, 1928, in Willmar, Minnesota, the daughter of George and Inga (Lofthus) Forsberg.  She grew up and began her education in the Willmar area.  At age 13, she moved with her aunts to California, where she continued her education.  While living in California, she worked as a nanny and housekeeper.  She later returned to the Willmar area.  While working at John’s Supper Club, she met Harold A. Johnson and they later married on November 19, 1949 in St. Paul.  They lived and farmed in the Svea community for many years.  Millicent raised their children on the farm and cooked meals for the farmhands.  After retiring from farming, they moved to Westview Village in Willmar.

Millicent was a member of Svea Lutheran Church.  She enjoyed crocheting and donated many blankets to women and babies.  She also enjoyed baking, canning, and playing cards and board games, especially dominos, cribbage, and Scrabble.  She was a kind, loving and generous person, who always put others before herself.

She was preceded in death by her parents; her husband: Harold Johnson in 2007; a son: David Johnson in 2009; a daughter: Jennifer Johnson in 2017; four brothers: Kenneth, George, Arnold, and Donovan; and six sisters: Christine, Irene, Doris, Marguerite, Kay, and Jackie.

Click to download / open
To order memorial trees or send flowers to the family in memory of Millicent Johnson, please visit our flower store.