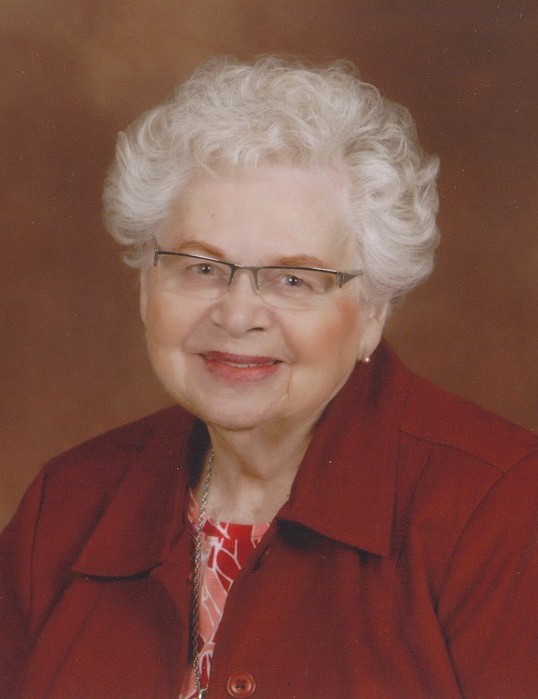 Merinda “Mindy” C. Fladeboe, age 96, of Perham, formerly of Willmar, died Friday evening, June 7, at Perham Living in Perham with her loving family keeping a vigil throughout the day.

Funeral services will be held at 2:00 p.m. on Tuesday, June 18, at Calvary Lutheran Church in Willmar.  Interment will be at Fairview Cemetery.  Visitation will be one hour prior to the service the church.  Memorials to honor Merinda may be directed to Calvary Lutheran Church, 302 Olena Ave. SW., Willmar, MN  56201.  Arrangements are with the Peterson Brothers Funeral Home in Willmar.  www.petersonbrothers.com

Merinda C. (Kleven) Fladeboe was born on November 13, 1922, the second and youngest daughter born to Edwin Kleven and Annie Sophia (Lia) Kleven. She was born on a farm during a snowstorm near Milan, Minnesota.  She was baptized and confirmed at Kvitseid Lutheran Church.  She attended country school at District # 49 for approximately four years with her sister Frances, until the death of her father from pneumonia in 1932.  She then moved with her family to Milan, Minnesota where she attended school during the school year.  She spent many happy, idyllic summers at Uncle Sven’s farm.  She graduated from Milan High School in 1940 and furthered her education at the University of Minnesota Morris, (then called the West Central School of Agriculture) majoring in business, graduating in 1941.  After college graduation Merinda was employed at Scott’s Store and the Sear’s Order Office in Montevideo.  Being adventurous she moved to Minneapolis where she was employed at the Soo Line Railroad business office.  In 1945, she accepted a position at the Federal Savings and Loan in Willmar, Minnesota. On May 7, 1947, Merinda married Sherman Russel Jennings Fladeboe, a World War II Veteran, at Kviteseid Lutheran Church, in Milan.  Merinda and Sherman honeymooned in San Diego, California and Tijuana, Mexico and settled in Willmar, Sherman’s hometown.  Together, Merinda and Sherman had three children in five years:  a daughter, Patricia Ann, and two sons, Randall Sherman and Robin Evan.  After the children were in school and college, Merinda was employed part-time at Lincoln Elementary School, Bethesda Nursing Home in the dietary departments and as a salesclerk as well.  During these years, she acquired the nick-name Mindy!  Merinda retired at the same time as her husband Sherman, as an agent with the Western Fruit Express Company/Burlington Northern Railroad.  After retirement, Merinda enjoyed traveling with her husband to California to visit her son and many other relatives and celebrating milestones.  She was a member of Calvary Lutheran Church in Willmar and Humility Circle.  She also belonged to the Sons of Norway and loved to wear her bunad in parades.   She was a lifetime member of the Women’s Veterans of Foreign Wars Auxiliary and was proud to assist her husband Sherman during his year as commander of the Willmar VFW.  She volunteered in the Senior Dining Program and enjoyed playing whist, knitting and watching the Minnesota Twins. She loved family reunions, including the Fladeboe reunion in the Willmar-Spicer area, the Kleven reunion in Milan and several Lia reunions in Appleton/Benson and summer picnic reunions at her son’s in St. Cloud.    Highlights of her life were celebrating her 35th and 50th wedding anniversaries with her husband and attending many class reunions at Milan High School, including her 70th.   In 2006, she moved to Perham, Minnesota to be near her daughter, after her husband passed away and she became an associate member of Calvary Lutheran Church in Willmar.   She traveled on many bus trips together with her daughter to destinations like Nashville, TN., Branson and St Louis, MO., Decorah, IA., St. Cloud, New Ulm and the Twin Cities.  She also enjoyed many trips to California to visit her son.  She especially enjoyed spending time with her grandchildren and great-grandchildren, telling them stories, playing, baking, reading and sharing her wisdom.

Merinda will be remembered for her sense of humor, preserver of family stories, history and heirlooms.  She was part of the greatest generation and possessed an amazing resiliency to adjust to hardships and changes in her life. When asked what her secret was to living so long and being a matriarch of the Kleven, Lia and Fladeboe families she replied, “Just be kind.”  She saw the best in everyone and all situations and had a very strong faith in the Lord.  Blessed be her memory!

To order memorial trees or send flowers to the family in memory of Merinda "Mindy" Fladeboe, please visit our flower store.