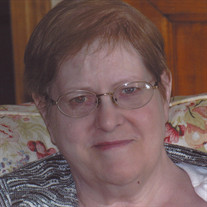 Mass of Christian Burial will be 11 a.m. Friday, May 12, at the Church of St. Mary in Willmar. Interment will be at St. Mary's Catholic Cemetery in Breckenridge, Minnesota, at a later date. Visitation will be 1/2 hour prior to the service at the church.

Marsha was born September 7, 1949, in Minot, North Dakota, the daughter of John and LaDonna (Bollum) Adkins. Marsha was baptized in Minot and confirmed at St. Mary's Church in Breckenridge, where the family had moved in the early 1950s. She enjoyed playing with all the neighborhood kids, spending time with her grandparents at Ottertail Lake, and taking trips with her family.

Marsha graduated from Perham High School in 1968. She then attended Staples Technical College, where she studied food preparation. Marsha lived in Fergus Falls for many years, before moving to Willmar in 2008 to be near her mother and other family. Marsha's favorite pastimes were listening to music and playing cards.

Marsha is survived by her sister: Joan Quinn and husband, Kevin Quinn of Spicer, MN; and her brother: David Adkins of Sioux Falls, SD. She is also survived by her nieces and nephews: Rick Fletcher and wife, Julie Helge; Barry Adkins; Cara Quinn and husband, Stefano Follega (and their children, Sean and Luca); Mick Quinn and wife, Chloe (Graham) Quinn (and their children, Avery, Hannah, Sophia, and Tommy); Ryan Quinn; Joshua Adkins; Jennica Adkins; Tessa Adkins; and Tanasha Deacon (and her son, Evoliano).

Marsha was preceded in death by her parents; two brothers, Dennis Adkins and Richard Adkins; and an infant niece.

Marsha's family would like to extend a special thank you to the staff at Bethesda for their wonderful care over the past several years.

To order memorial trees or send flowers to the family in memory of Marsha Adkins, please visit our flower store.