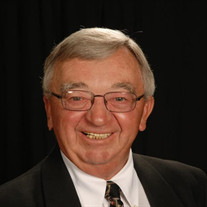 Marlyn W. Wacholz, age 81, of Spicer died unexpectedly Wednesday evening, May 24, at Rice Memorial Hospital in Willmar.
Funeral services will be held at 10:30 AM Tuesday, May 30, at Faith Lutheran Church in Spicer, MN. Interment will be in the Spicer City Cemetery. Friends may call from 5-7 P.M., Monday at the Peterson Brothers Green Lake Funeral Home in Spicer, MN and at the church one hour prior to the services. (www.petersonbrothers.com)
Marlyn William Wacholz was born March 14, 1936, to William and Erma (Meyer) Wacholz, on the family farm in Mansfield, MN. He grew up and graduated from Kiester High School, attended Wartburg College in Waverly, IA and graduated with a Master's degree from the University of Minnesota. He married Betty Lou Edens in 1960, and lived on the Army base in Lawton, OK. Three sons were born to them: Jim, Tom, and John. They moved to Renville, MN in 1962 where Marlyn taught Agriculture at the high school for 15 years. In 1977, Marlyn and Betty moved to Granite Falls where he worked in higher education for MN State Colleges and Universities' both in Granite Falls and later in Rochester, MN. He retired in 1995 as President of Riverland Technical College in Rochester, MN. He was National FFA President and inducted into the FFA Hall of Fame. In 1995, Marlyn and Betty purchased a home on Green Lake in Spicer, MN and began spending time in Arizona during the winter months. After Betty's death in 1998, Marlyn married Norma (Sombke) Thompson in the fall of 1999 where they continued to live on Green Lake and purchased a home in Sun City, AZ. Marlyn was a devoted father, brother, husband, grandfather, and great grandfather. He loved baseball, hunting, fishing, golf, landscaping, card playing, table tennis, and spending time with his family. He touched the lives of many and we celebrate a life well lived.
He is survived by his wife, Norma Wacholz of Spicer, five sons; James (and LeeAnn) Wacholz of Rochester, Thomas (and Beth) Wacholz of Alexandria, John (and Beth) Wacholz of Lakeville, Cole (and Laurie) Thompson of Grapevine, Texas and Marcus (and Mary Jo) Thompson of Eugene, Oregon and one daughter, Dawn Davis of San Francisco, California. Also surviving are 18 grandchildren, nine great grandchildren, two brothers; Leon (and Linda) Wacholz of West Melbourne, Florida and Dale (and Carolyn) Wacholz of Mankato and one sister, Karen (and LaMar) Courrier of Deer River, besides other relatives and friends.
Marlyn was preceded in death by his parents and first wife, Betty Lou in 1998.

To order memorial trees or send flowers to the family in memory of Marlyn Wacholz, please visit our flower store.