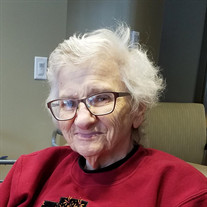 Marline DeVonne (Kuenle) Heil, 80, was born March 22, 1938 to William and Elsie (Weber) in Winnebago, Minnesota and died July 27, at Bethesda Grand with Rice Hospice Care with excellent and caring people.

Family and friends will hold a celebration of life service, Thursday, August 2, at Vinje Lutheran Church in Willmar at 11 am, with visitation one hour prior to the service. Interment will be at Immanuel Cemetery in Brownton. Arrangements are with Peterson Brothers Funeral Home in Willmar. www.petersonbrothers.com

Marline was one of seven children, four boys, three girls, and twin to her sister Pauline. She and Pauline were born in a blizzard with the doctor staying five days. She was baptized and confirmed, on her birthday, in a blizzard at the Evangelical and Reformed Church in Pleasant Prairie township in Martin County.

Marline graduated from East Chain Consolidated School in 1956. She worked at nursing home care in Fairmont, Minnesota and at Burns Manor in Hutchinson.

Marline married Donald William Heil, and later divorced. To this union, five boys were born, Scott William, William Scott, Terry Donald, John Michael and Christopher Paul.
Marline lived a life of unselfish service. A den mother to her sons' cub scout troops, Marline was a member of the American Legion Auxiliary in Hutchinson and served as President. She was a dedicated volunteer at Emmanuel Lutheran (Brownton) and Vinje Lutheran (Willmar), teaching Sunday School, assisting with Wednesday children's programing, a Lenten mentor, and singing in church choirs. She served countless cups of coffee, made gallons of lemonade while assisting at Community Meals, Lenten meals and Sunday coffees. She also volunteered with Multiple Sclerosis. Marline dedicated 24 years at Willmar Schools. She loved entertaining children and people and was passionate about helping everyone. Needle point was one of her hobbies. When and wherever needed, Marline was there with her sense of humor, smile and positive attitude. She was the Lutheran version of Mother Teresa.

To order memorial trees or send flowers to the family in memory of Marline Heil, please visit our flower store.