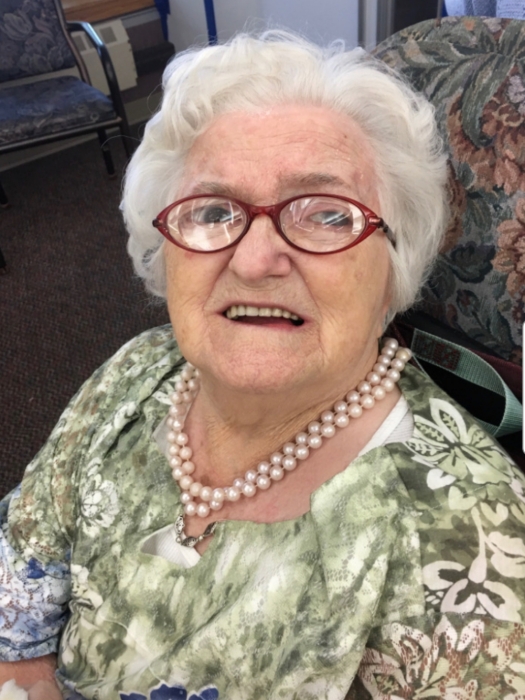 Marlene R. Pederson, age 85 of Paynesville and formerly of Willmar, passed away peacefully Sunday morning, September 20, at the Koronis Manor in Paynesville.  A private family graveside service was held at Calvary Lutheran Cemetery in Willmar.  Memorials are preferred to the Gideon Chapter of Willmar.  Arrangements are with the Peterson Brothers Funeral Home in Willmar..  www.petersonbrothers.com

Marlene Ruth (Krueger) Pederson, daughter of Henry and Elsie (Siebert) Krueger was born on October 26, 1934 near Adrian, North Dakota.  At the age of almost 4 years old, she moved with her parents to Paynesville Minnesota.  She went to country school thru the 6th grade and then attended and graduated from Paynesville High School in 1952.  Marlene worked at Bergies Market for a while and later in the healthcare field as a nurse’s aide.  In October of 1971, she married Herman Pederson, at the Grace United Methodist Church in Paynesville.  Marlene was a Gideon Auxiliary member.  She and her husband Herman were the drivers of the Gideon float for many years in all the local area parades.  Even flying to attend Gideon Events in several states.  She enjoyed putting puzzles together, eating out and was a member of Calvary Lutheran Church in Willmar. In her later years, Sunday afternoons were spent singing hymns along with recorded music or while one of her nieces played the piano.  She became a resident of the Koronis Manor in Paynesville, to be closer to her sister, a little over 4 years ago.  She had a strong faith in her Lord and Savior Jesus Christ.

She is survived by her sister, Delores Schoenherr; four nieces, Marlys (Paul) Houk, Marilyn (Steven) Nelson, Cindy Schoenherr and Debra (Tony) Bengtson and one nephew, Warren (Corryn) Schoenherr, besides other relatives and friends.

She was preceded in death by her parents; and her husband, Herman in 2004.

To order memorial trees or send flowers to the family in memory of Marlene Pederson, please visit our flower store.