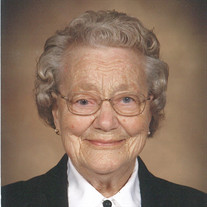 Funeral services will be 1 p.m. Tuesday, December 29, at Vinje Lutheran Church in Willmar. Interment will be at Cloverleaf Memorial Park Cemetery in Willmar. Visitation will be 4-7 p.m. Monday, December 28, at Peterson Brothers Funeral Home in Willmar and one hour prior to the service at the church.

Marie Johanna Janssen was born July 1, 1919, on the family farm in Plymouth County near LeMars, Iowa, the daughter of Ulrich and Anna (Lubben) Kock. She grew up on the family farm with her three brothers and two sisters and attended Elgin Township School. Marie was baptized and confirmed at St. John's Lutheran Church in LeMars. On September 19, 1936, she was united in marriage to William H. Janssen, and they were blessed with four children. The Janssen's made their home in Merrill, Iowa until 1948, when they moved to Willmar, Minnesota due to William's transfer of employment with the Great Northern Railway.

Marie was a hard worker and worked several years at Allstate Hatchery in Willmar before serving over 20 years as a Foster Grandparent at Willmar Regional Treatment Center. She received the President's Call to Service Award in 2004. Fresh baked goods were always enjoyed at her home, with Special K bars being the favorite. Later in years, Marie crafted a quilt using William's and her sons' suit pants for fabric. She enjoyed writing letters, was quite the bowler, and loved the competition of playing cards (usually being the winner of a game of Kings in the Corner). Living next to a park in Willmar's Sperryville, Marie initiated her own "litter pick-up" there and at Robbins Island, for which she proudly received a thank you from the City of Willmar Park and Recreation Department. She was also a member of the Kandiyohi County Historical Society for many years. Marie enjoyed the lifetime passes on Burlington Railway and Delta Airlines. She traveled to Seattle and to Germany to visit relatives and other European countries.

Marie was preceded in death by her parents, her husband, William in 1976, one sister, Irene Lee, four brothers, Gerhard, John, Harm and Clarence Kock, three nieces and one nephew.

To order memorial trees or send flowers to the family in memory of Marie Janssen, please visit our flower store.