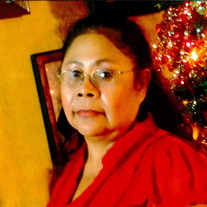 Funeral services will be held at 3:00 p.m. on Friday, January 15, at Peterson Brothers Funeral Home in Willmar. Interment will be at Fairview Cemetery. Visitation will be one hour prior to the service.

Maria Magdalena Uvalle de Ramos was born on August 2, 1966, in Villaldama, Nuevo Leon, Mexico, the daughter of Manuel and Adela (Rodriguez) Uvalle. She grew up and received her education in Mexico. On November 19, 1988, Maria was married to Apolinar Ramosa�"Sauceda. In September of 1992, they immigrated to the United States. They made their home in Pennock and later moved to Willmar. She worked hard as a homemaker, taking care of her children, husband and father. She enjoyed cooking and being together with family. She was a good friend to many.

She was preceded in death by her mother, Adela.

To order memorial trees or send flowers to the family in memory of Maria Ramos, please visit our flower store.