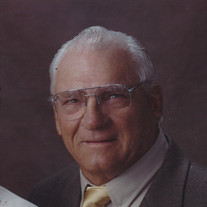 Lucien Leon Vlaminck, age 86, of Kandiyohi, Minnesota, passed away on Friday, March 9, at his home. Blessed and eternal be his memory!


Mass of Christian Burial will be held at 11:00 a.m. on Tuesday, March 13 at Our Lady of the Lakes Catholic Church in Spicer. Interment will be at St. Patrick's Catholic Cemetery in Kandiyohi. Military Honors will be provided by the Willmar American Legion Post. Visitation will be from 6-8 p.m. on Monday, March 12, at Peterson Brothers Funeral Home in Willmar and visitation will continue for one hour prior to the service on Tuesday at the church. www.petersonbrothers.com


Lucien Leon Vlaminck was born July 13, 1931, on the family farm in rural Ivanhoe, Minnesota to Peter and Ida (Sinave) Vlaminck. He was baptized, received first communion and was confirmed at Saints Peter and Paul Catholic Church in Ivanhoe. Lucien attended country school through the eighth grade before helping on the family farm. Lucien joined the United States Army in August 19, 1948 and served his country in Japan during the Korean War. He was honorably discharged in November 1952 and returned to Minnesota where he met love of his life, Ellen Jean Ramsbacher. Lucien and Ellen were united in marriage on June 24, 1954, at Holy Redeemer Catholic Church in Marshall. The couple farmed east of Ivanhoe until 1967 after which they moved to Willmar and then in 1970 to their current residence in Kandiyohi. Lucien was employed by the MN Highway Department (MnDOT) from 1966 until his retirement in 1996. Lucien was a proud life-long farmer at heart and a member of the American Legion, Veterans of Foreign Wars (VFW), Disabled American Veterans (DAV), Knights of Columbus and long-time member of the Catholic church. His other enjoyments in life included plowing snow, "putzing," tinkering, inventing things, fishing, bird-watching, scouting and tractors. He was the ultimate cheerleader for his children and grandchildren. He loved attending and supporting his grandchildren in their many activities. During retirement he enjoyed spending time with family, winters in Arizona, and working at Walmart garden center.

To order memorial trees or send flowers to the family in memory of Lucien Vlaminck, please visit our flower store.