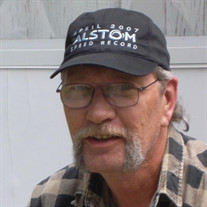 Memorial services will be 1 p.m. Saturday, February 24, at Tripolis Evangelical Lutheran Church near Kandiyohi.  Visitation will be one hour prior to the service at the church.  Arrangements are with Peterson Brothers Funeral Home in Willmar.

Loren Lee Mackedanz was born July 1, 1953, in Hutchinson, Minnesota, the son of Warren and Loretta (Schlueter) Mackedanz.  He grew up in Hutchinson and graduated from Hutchinson High School.  He enlisted in the U.S. Army and served in Vietnam during the Vietnam War.  He graduated from the Willmar Vo-Tech in 1976 with an electronics degree.   On December 17, 1977, Loren was united in marriage to Connie Erickson.  Loren worked as a signalman for BNSF Railroad and was stationed in Willmar, Morris and Mitchell.  He retired in 2015.  Loren enjoyed stock car races, gun collecting, and being outside on the prairie.

He is survived by a daughter: Lisa (and Sam) Linton of Port Tobacco, MD; a son: Jeremiah (and Angie) Erickson of Eagle River, AK; and four grandchildren: Korben Linton, Sophianna Linton, Kathrena Linton, and Elizabeth Erickson.  Also surviving are four brothers: Ron (and Janet) Mackedanz of Kandiyohi, MN, Greg Mackedanz of St. Cloud, MN, Curt (and Vicki) Mackedanz of Spicer, MN, and Neal (and Jane) Mackedanz of Ohio; three sisters: Diane Macke of California, Judy (and Dean) Jaeger of Texas, and Cynthia Fossan, PhD, of Minneapolis, MN; and other relatives and friends.

He was preceded in death by his parents: Warren and Loretta Mackedanz.

To order memorial trees or send flowers to the family in memory of Loren Mackedanz, please visit our flower store.