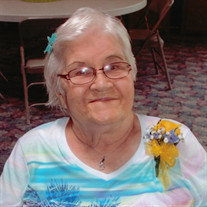 Funeral services will be held at 2 P.M., Thursday, June 29, at Hope Lutheran Church in Sunburg. Visitation will be one hour prior to the service at the church. Arrangements are with Peterson Brothers Funeral Home in Willmar. (www.petersonbrothers.com)

Lois Maude Sisco was born on May 11, 1925 in Napoleon, North Dakota, the daughter of Peter and Jessie (Hoof) Nord. She grew up in that area and received her education and graduated from Napoleon High School in 1941. On Dec. 17, 1942, she was married to William K. Sisco in Linton, North Dakota and they farmed by Napoleon, Kintyre and Steele, ND. In the early 1960's they moved to Benson, Minnesota. They later moved to Paynesville, Olivia and in 1972 to Grand Island, Nebraska. William and Lois divorced and she returned to Olivia and in 2002 moved into the Bethesda Homes in Willmar.

Lois was a homemaker while on the farm and later worked as a waitress. She enjoyed her waitress jobs at Hobo Joes in Nebraska, The Gateway Truck Stop and the Chatterbox Café in Olivia. She enjoyed cooking for her children and grandchildren, hosting birthday parties, trips to Jackpot with family and friends and at Bethesda, she enjoyed her birds. Lois loved people and enjoyed visiting.

To order memorial trees or send flowers to the family in memory of Lois Sisco, please visit our flower store.