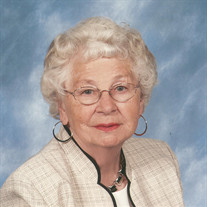 Funeral services will be held at 11:00 a.m. on Wednesday, June 29, at Calvary Lutheran Church in Willmar. Interment will be at the Benson City Cemetery. Visitation will be one hour prior to the service at the church on Wednesday.

Lauretta was born July 11, 1923 in Watertown, South Dakota, the daughter of Loarf and Hilda (Wolters) Westphal. She grew up and received her education in Twin Brooks, South Dakota and was baptized and confirmed in the Lutheran faith. On September 11, 1943, she married Walter R Anderson. They lived in the Clontarf, Minnesota area and Lauretta worked as a home maker. Walter died in 1969 and Lauretta later moved to the Kerkhoven area, where she worked at Simmons Produce and the Kerkhoven Nursing Home. In 1975, she married Clifford Theline and they made their home in Willmar. Clifford died in 2002. Lauretta most recently had resided at Bethesda Heritage Center Nursing Home in Willmar.

Lauretta was a member of Calvary Lutheran Church in Willmar. She enjoyed gardening, watching birds, and playing cards and board games.

She is survived by five children, Lawrence Anderson of Alexandria, Beverly Holmgren of Murdock, Jan (and Joseph) Carroll of St. Cloud, Nathain "Mic" (and Doreen) Anderson of Willmar, and Gaylin Anderson of Norwood Young America; thirteen grandchildren; 26 great-grandchildren; and five great-great-grandchildren. Also surviving are six sisters, Helen Wilke of Spokane, WA, Ruth (and Mel) Schliep of Hopkins, Jean Olson of Spicer, Elaine (and Tom) Mohr of Hancock, Mavis Mohr of Prior Lake and Marilyn (and Ken) Windholz of Ellis, KS; a sister-in-law, Jeanne Westphal of St. Paul; and other relatives and friends.

She was preceded in death by her parents; both husbands, Walter Anderson in 1969 and Clifford Theline in 2002; a sister, Margaret Bolger; three brothers, Arthur, James and Robert; and two brothers-in-law, Leslie Olson and Wayne Wilke.

To order memorial trees or send flowers to the family in memory of Lauretta Theline, please visit our flower store.