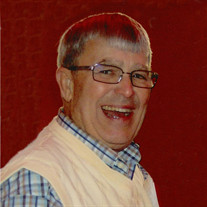 His memorial service will be 10 a.m. Tuesday, October 3, at Vinje Lutheran Church in Willmar. Interment will be at the Minnesota State Veterans Cemetery near Little Falls. Visitation will be 5-7 p.m. Monday, October 2, at Peterson Brothers Funeral Home in Willmar and will continue one hour prior to the service at the church. Memorials are preferred to Vinje Lutheran Church or Rice Hospice.

Larry Howard Gates was born July 28, 1934, in Little Falls, Minnesota, to Francis and Irma (Perry) Gates. He was the oldest of six children. They were raised on Langola Holstein Farm in rural Rice, Minnesota. Larry attended District 15 country school in Benton County for eight years and graduated from Royalton High School in 1952. He was active in 4-H Club and won his first trip with a dairy calf to the State Fair in 1946, which was later cancelled due to the polio epidemic. He received his Bachelors of Arts degree in Office Management from St. Cloud State Teachers College in 1956. Needing to fulfill his military obligation, Larry served two years in the U.S. Army, including 17 months in Wurzburg, Germany. On June 17, 1961, Larry said "I do" to Roberta "Bobbi" Priest Stradtman. This union was blessed with three children: Tim, Julie and Bill.

Larry began his career working at Univac in St. Paul in the military contracts division for eleven years. Larry and Bobbi then operated Dairy Queen Stores in Willmar and Montevideo for three years. Larry then was employed at Willmar Poultry Company for 25 years, the last 11 years as the hatchery division manager.

Larry was a dedicated Willmar Noon Lions Club member for many years. His passion was bringing Willmar High School seniors to their weekly Wednesday noon meetings during the school year. He enjoyed his many years with the Lions bowling team and received the Lions Melvin Jones Award. Vinje Lutheran Church activities were also important to Larry. He served on the church council, for 6 1/2 years as the church treasurer, a greeter, and with the meal of the month activity.

Larry and Bobbi traveled to all 50 states and 38 foreign countries and enjoyed wintering in Arizona. They attended many of their children's and grandchildren's high school sports and music events. Larry also enjoyed watching many Gophers, Twins and Vikings games on TV. He was always available for party bridge or a game of cribbage.

He was preceded in death by his parents; his parents-in-law; and two brothers-in-law, James Stradtman and Peter Marino.

To order memorial trees or send flowers to the family in memory of Larry Gates, please visit our flower store.