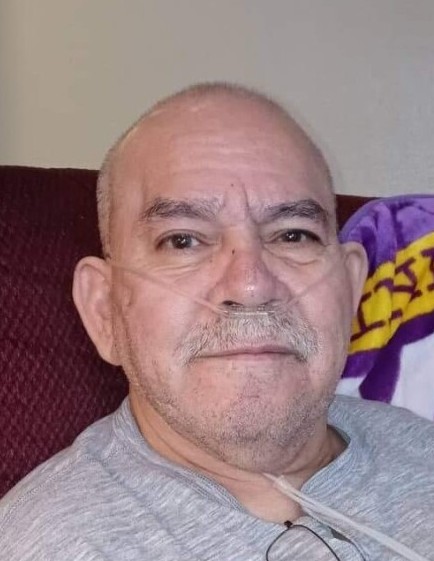 Juan Manuel Vera Sr. was born on March 28, 1955, in Edinburg, Texas, the son of Vicente Sr. and Herminia (Maldonado) Vera.  He grew up and received his education in Corpus Christi, Texas.  Juan was employed in the pipeline industry and later as a roofing contractor.  In 1996 he moved to Willmar to be closer to family.  From 1996 to 2003, Juan worked at Jennie-O Foods in Willmar and was forced to retire early due to health reasons.  He was an avid fisherman, a talented woodworker and a fan of the Minnesota Vikings and Green Bay Packers.  Juan enjoyed listening to music, especially country and Spanish and visiting area casinos with Elida.  Juan will be remembered for his great sense of humor, his ability to always make others laugh and his happy smile.

He is survived by his love of over 17 years, Elida of Willmar; eight children, Juan (and Jenise) Vera, Irma (and Esteban) Vera, Ramon (and Elizabeth) Vera, Roxanne (and Chris) Lozano, Juan (and Teri) Lozano, Adrian Robledo, John (and Stacey) Vera and Alex (and Samantha) Lozano; forty grandchildren and eleven great grandchildren.  Also surviving are three siblings, Pablo, Dora and David Rodriguez and his beloved canine companions, Peanut, Max and Daisy Vera, besides other relatives and friends.

He was preceded in death by his parents; twelve siblings; two sons, Jose Lozano and Adam Robledo and one grandson, Diamente.

To order memorial trees or send flowers to the family in memory of Juan Vera Sr., please visit our flower store.