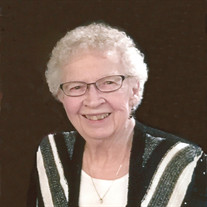 Funeral services will be 11 a.m. Thursday, April 21, at Svea Lutheran Church.  Interment will be in the church cemetery.  Visitation will be 6-8 p.m. Wednesday, April 20, at Peterson Brothers Funeral Home in Willmar and will continue one hour prior to the service at the church.   In lieu of flowers memorials are preferred. www.petersonbrothers.com

Iva Dell "Ivy" Gorans was born on January 13, 1928 in Willmar, Minnesota, the daughter of Halvor J. and Alma Tonette (Spaanem) Eliason.  The family made their home on Alma's family farm north of Sunburg.  When she was about eight years old, they moved to a farm in Lake Johanna Township, Pope County, Minnesota.  She received her early education in that area and was confirmed at the Sunburg Free Lutheran Church.  They moved to Willmar when Halvor worked for the railroad.  Ivy completed her education in Willmar, graduating from Willmar High School in 1945.  On March 28, 1951, she married James Douglas Gorans at Vinje Lutheran Church in Willmar and they made their home on a farm near Svea, where they raised their family.  They moved into Willmar in the fall of 2013.  She was an active member of Svea Lutheran Church since moving to the Svea area.  Ivy had a real love of her faith and her family, that was the important  parts of her life.  She always was interested in what the family was doing and if someone was going to stop to visit, she made sure she was there.  She loved dogs and had at least one around her for much of her life; most notably their last one "Annie".  She enjoyed doing crossword puzzles and playing cards with her best friends Opal  and Carol and her sister Hallis until her passing in 2013.

To order memorial trees or send flowers to the family in memory of Iva-Dell Gorans, please visit our flower store.