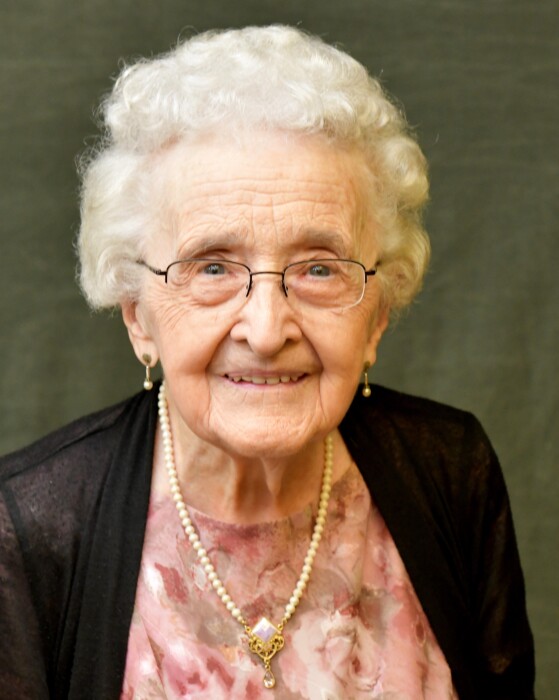 The funeral service can be viewed on the Facebook page of Bethel Lutheran Church on Thursday, Oct. 29, at 11:00 a.m .

Heaven gained another angel on October 24, 2020, when Irene Whitmyre passed away at Compassionate Cottage in Willmar.

Irene Elizabeth Whitmyre was born April 1, 1920, in Day County, South Dakota, to Emil and Augusta Herr.  She grew up in the Butler, SD. area.  Following her graduation from Butler High School, she earned her two year teaching degree and taught country school.

She caught the eye of a tall, handsome Konrad Whitmyre who was from Butler.  When the US entered WW ll, Konrad enlisted in the Navy.  They were married on June 5, 1943, in Chicago, IL.  After the end of the war, Konrad began teaching in SD.  The family grew with the addition of Janet, Karen, Gwen and Elaine.

Irene spent those years raising the girls and moving to a new town every few years (7 towns). She also worked as school secretary in two schools.  She still wanted to return to teaching and began taking classes to complete a BA in Elem. Ed.  She accomplished that the year she turned 50, at St. Cloud State, 1970.

Irene was hired by St. Anthony’s Elem. in Watkins, MN, where they were living at the time.  She taught Chapter 1 and loved the students and her co-workers.

When Konrad and Irene retired, they built a home on Green Lake, Spicer, MN.  They traveled extensively during that time and were active in their church.  Five grandchildren joined the family during those years.

Konrad and Irene moved  into Willmar in 1993 and entered a new phase in life.  They joined Bethel Lutheran and continued to travel when possible.  Konrad passed away in 2004.

Irene continued to be active but moved into Sunrise Village, Willmar.  One of her favorite ‘jobs’ was working for Compassionate Care, who aids seniors who need help with daily tasks in their homes.  When her health suddenly declined, the staff made it possible for Irene to move into one of the Cottages in late 2019.

Irene achieved her goal of reaching 100 this year.  Her beloved church celebrated Covid-19 style with a caravan of 100+ vehicles driving past the Cottage.

Irene was preceded in death by one daughter, Karen in 2002; her husband, Konrad; one son-in-law, Ron Wait; her parents, one sister, Edna and sister-in-law, Virginia.

She is survived by one sister, Eleanore (103); one brother, Lester (98); three daughters, Janet (and Marv) Gravley of Alexandria, Gwen Whitmyre of Willmar and Elaine Wait of Maple Grove; five grandchildren and nine great-grandchildren. Also surviving are a host of relatives and friends far and wide.

Blessed be her memory!

To order memorial trees or send flowers to the family in memory of Irene Whitmyre, please visit our flower store.