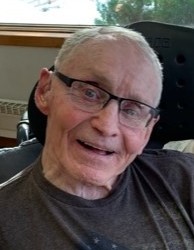 Harold James Madsen was born on December 29, 1941, in Springfield, Minnesota, the son of Harold and Alveda (Kosel) Madsen.  He grew up in Sanborn and received his education from the New London and Owatonna Schools.  He worked as a farm laborer for the Vikse Family near Willmar for many years.  In 1977, Harold began employment at the Willmar Regional Treatment where he met his wife, Peggy Moses.  They were married on August 31, 1980.  They made their home in Hawick and retired together from the WRTC on March 31, 1997.  Harold loved farming and playing the harmonica.  He was a great inspiration to all that knew him!

He is survived by his wife, Peggy; five siblings, Sharon Nelson of Shell Lake, WI., Barbara Madsen of Eden Prairie, Richard (and Julie) Madsen of Willits, CA., David Madsen of Hawick and Debra (and Lyle) Nelson of Brooten, besides other relatives and friends.

He was preceded in death by his parents and two brothers, Gary Madsen and Arvid Madsen.

To order memorial trees or send flowers to the family in memory of Harold Madsen, please visit our flower store.