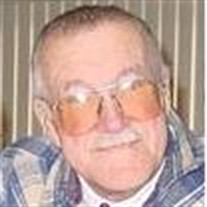 Funeral services will be held at 1:00 p.m. on Friday, Feb. 10, at Hope Lutheran Church in Sunburg. Interment will be at West Norway Lake Lutheran Cemetery. Visitation will be one hour prior to the service at the church.

Harlan Richard Elmo Erickson was born on July 9, 1940, on the family farm in Brooten, the son of Elverd and Clara (Olson) Erickson.  He grew up and received his education in the rural Brooten community.  After graduation, Harlan moved to Minneapolis and was married to Darlene Simonson and were blessed with two daughters, Kim and Jennifer.  They later divorced.  Harlan was then married to Luella Gebhard and they made their home in the Twin Cities area.  Harlan struggled in life to find good jobs and in the years to come worked in many different lines of work.  His final employment was as a security guard with Zeag USA of which he had great pride.  Following Luella's death, Harlan moved to Anoka and later met his sweetheart, Mary Heidelberger.  They enjoyed music, going on walks and watching car shows.  Harlan's health began failing and he recently moved into Crestview Lutheran Home in Columbia Heights.  Harlan's hobbies included picture puzzles, playing board games and word search puzzles.

He is survived by one daughter, Kim Olson of Anoka; seven grandchildren and eleven great grandchildren.  Also surviving are two brothers, Arthur (and Carol) Erickson of St. Cloud and Ernest Erickson of Sunburg; and one sister-in-law, Lavonne Erickson of Brooten, besides other relatives and friends.

He was preceded in death by his parents; his wife, Luella in 1995; one daughter, Jennifer in 2008; and two brothers, Arnold and Kenneth Erickson.

To order memorial trees or send flowers to the family in memory of Harlan Erickson, please visit our flower store.