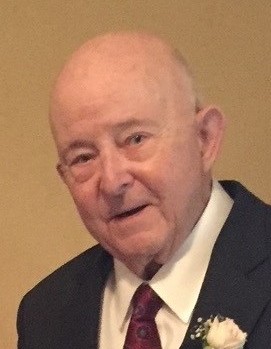 A celebration of life service will be held at 11:00 a.m. on Saturday, Dec. 11, at Crossroads Community United Methodist Church in Spicer.  Visitation will be one hour prior to the service.  Military honors will be provided by the Henderson-Lewis American Legion Post #545 in Spicer. Arrangements are entrusted to the Peterson Brothers Green Lake Funeral Home in Spicer.  www.petersonbrothers.com

The funeral service will be live streamed at Crossroads Community UMC:  //https://youtu.be/8mkFltT3ZWY

Gerald “Gerry” Lewis O’Connor was born on February 21, 1936, in Minneapolis, Minnesota, the son of Timothy and Dorothy (Lewis) O’Connor.  He grew up in Renville, graduated from Renville High School in 1954 and attended Carlton College, graduating in 1958 with a degree in Political Science and International Relations.  Following college, he began working as a bank examiner in Minneapolis and was later drafted into the U.S. Army.  He was stationed in Bamberg, Germany, where he played in the Army band.  After his honorable discharge, Gerry worked at O’Connor Brothers State Bank in Renville.  On October 28, 1961, Gerry was married to Patricia Knoll.  He was later recalled to active duty for one year and was stationed in Ft. Lewis, Washington.  Gerry returned to the family business in Renville and retired as the bank president in 1992.  Gerry and Pat enjoyed living on a farm near Sacred Heart for over 10 years.  In 2003, they remodeled their cabin into a permanent home and have resided on Green Lake since.  This past October, they celebrated their 60th wedding anniversary.  Gerry was a proud lifelong member of the United Methodist Church.  He was also a member of the Spicer American Legion Post, Masonic Lodge and Zuhrah Shrine Temple.  He enjoyed many years of golf, camping, traveling with his family and boating on Green Lake.

He is survived by his loving wife, Pat of Spicer; his three children, Mary (and Dan) Magnuson of Northfield, Gerald P. (and Amy) O’Connor of Sugar Land, TX., and Erin (and Roger) Pittman of Claremont; six grandchildren, Marc (and Traci) Pittman, Emma (and Stephen) Basness, Jack Magnuson, Maggie Magnuson, Adam (and Laura) O’Connor and Abby O’Connor; and four great grandchildren, Maci and Myla Basness and William and Benjamin Gerald Pittman.  Also surviving is one sister, Mary Jane Young (and Howard Carlsen) of Spicer and one brother, Timothy J. (and Denise) O’Connor of Owatonna, besides other relatives and friends.

To order memorial trees or send flowers to the family in memory of Gerald "Gerry" O'Connor, please visit our flower store.