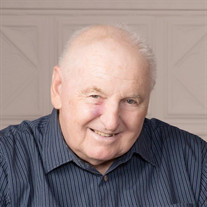 Funeral services will be held at 1:30 p.m. on Friday, June 24, at the Harrison Community Presbyterian Church in rural Spicer. Interment will be at Cloverleaf Memorial Park Cemetery. Visitation will be from 6-8 p.m. on Thursday, June 23, at the Peterson Brothers Atwater Funeral Home in Atwater and will continue one hour prior to the service at the church.

George "Fred" Klose Jr. was born on October 10, 1936, in St. James, Minnesota, the son of George Sr. and Harriet (Erickson) Klose. At the age of seven, his family moved to Atwater where Fred grew up and received his education, graduating from Atwater High School in 1955. On April 27, 1956, at the First Presbyterian Church in Litchfield, Fred was united in marriage to Bessie Mae Johnson. From 1956-1957, Fred served in the U.S. Army as a MP in Anchorage, Alaska and they made their home there. In 1957, they returned to Minnesota and in 1959, they purchased a farm in Gennessee Township. Fred was engaged in farming his entire life. He was a longtime member of Harrison Presbyterian Church where he served as an Elder and Head Usher. He was also a member of the Minnesota Farmers Union. Fred served on many boards such as the Kandiyohi Co-Op Elevator, Atwater School Board, Atwater Creamery Board, Atwater Threshers Board, and the Gennessee Township Board. In 1972, Fred received the Outstanding Young Farmer Award and in 2010 received the Lifetime Achievement Award from the Minnesota Farmers Union. Fred cherished the time spent with his family and was proud to be a good steward of the land.

He is survived by his loving wife of over 60 years, Bessie of Atwater; three children, Jeff (and Jean) Klose of Kandiyohi, Lori Klose of Benson and Lisa (and John) Severson of Eau Claire, WI., six grandchildren and nine great grandchildren. Also surviving are three brothers, Gary (and Monica) Klose of New London, Richard Klose of Burtrum and Patrick Klose of Burtrum and three sisters, Cleo (and Bill) Hunter of Penrose, NC., Brenda (and Art) Dart of Deer Park, WA., and Susan Klose of Burtrum, besides other relatives and friends.

He was preceded in death by his parents; one brother, Mark; and one great grandson, Teegan.

To order memorial trees or send flowers to the family in memory of George Klose, Jr, please visit our flower store.