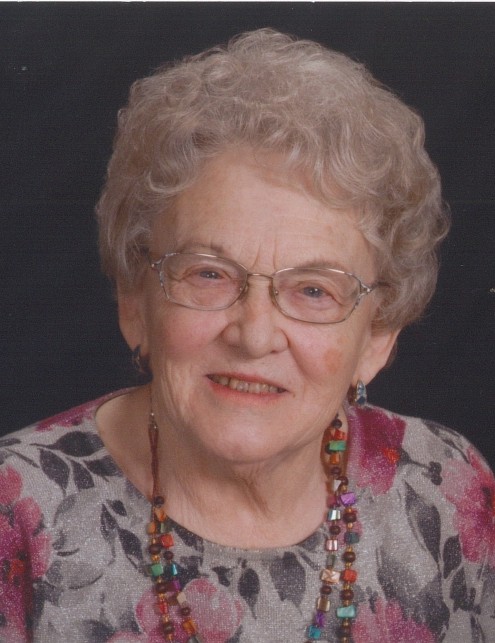 Mass of Christian Burial will be at 11 a.m. Wednesday, August 7, at the Church of St. Mary in Willmar. Interment will be in the church cemetery. Visitation will be 5:00 p.m. to 7:00 p.m. Tuesday, August 6, at Peterson Brothers Funeral Home in Willmar with a 7:00 p.m. Rosary by the Daughters of Isabella.  Visitation will continue one hour prior to the Mass at the church on Wednesday.

Frances Anna (Cink) Stoffel was born October 31, 1923, in Wesley, Iowa, the daughter of Frank and Bertha (Ciha) Cink. Fran was raised on a farm near Bancroft, Iowa and attended school in Bancroft.  She graduated from St. John’s High School in the spring of 1941.  After high school Fran worked as a nanny for a local family and at Brown Photography in Algona, Iowa developing pictures.

Fran met her future husband, Mike, at a ballroom in Algona, Iowa and married Mike Stoffel on April 27, 1944. Mike and Fran started farming as hired hands in the Algona area where they started their family.  In 1956 they moved to a farm near Svea, Minnesota and three years later to a farm near Raymond, Minnesota. In 1964 Mike and Fran moved to Willmar, MN.  Fran was a stay at home mom until all the children were in school, where she also cared for the children of family and friends. She then took a job at Willmar Poultry Company as a turkey injector, de-beaker, toe trimmer and sexer.  She retired after working for WPC for over 20 years.

Mike and Frances enjoyed dancing. They spent several weekends at local dance halls dancing the night away. They even taught Polka lessons to many couples in the Willmar area.  Mike and Fran enjoyed bowling, golf and playing cards and dominos with family and friends. They also loved vacationing in Detroit Lakes with family and friends. Fran enjoyed tending her flower beds and gardens.  In the spring of 2014 Mike and Fran celebrated their 70th Wedding Anniversary.

Fran was a member of the St. Mary’s Alter and Rosary Society and the Daughters of Isabella.  She was also a member of the American Legion Auxiliary.  Fran was the only Catholic member of the Svea Lutheran Church Sewing Club.  Fran held a special place in her heart for the next door “Church Ladies” from First Covenant Church who welcomed her to their weekly Bible Study.  Fran was a Church Ambassador who had a broad spectrum of lady friends.

She was preceded in death by her parents; her husband Mike Stoffel; a daughter, Darlene Stoffel; two brothers, Julius Cink and James Cink; and two sisters, Ruth Robinson and Lillian Watts.

Click to download / open
To order memorial trees or send flowers to the family in memory of Frances Stoffel, please visit our flower store.