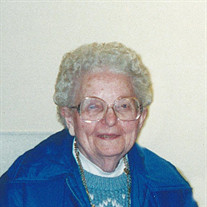 Fern C. E. Ristow, age 97, of Willmar, died Friday morning, Sept. 9, at Bethesda Heritage Center in Willmar.
Services will be held at 1:30 PM Tuesday, September 13, at First Lutheran Church of Norway Lake in rural New London. Interment will be in the Fairview Cemetery in Willmar. Visitation will be from noon until time of service on Tuesday at First Lutheran Church of Norway Lake. Arrangements are with Peterson Brothers Funeral Home in Willmar. (www.petersonbrothers.com)
Fern Claire Edith Ristow was born on September 3, 1919, on the family farm in Lake Andrew Township, Kandiyohi County, Minnesota, the daughter of Emil Victor and Anna Caroline (Thorson) Peterson. She lived on the family farm and attended District 108 School, graduating from the 8th grade. She was confirmed at Lebanon Lutheran Church in 1933. Fern lived in the New London area until her marriage to Kenneth Paul Ristow on October 15, 1937. During World War II they lived in Superior, Wisconsin, where Ken served in the US Navy. They moved to San Francisco, California, where Fern was a homemaker. After Kenneth's death in 1969 and to be closer to family, Fern moved to Willmar in 1972 and she worked as a cashier at the Rice Memorial Hospital Cafeteria. She moved into Bethesda Heritage Center in 2008. She was a member of the First Lutheran Church of Norway Lake. Fern loved and enjoyed visiting and being with family and friends and was a devoted wife and mother.
She is survived by one sister, Mercedes Peterson of Willmar, five nieces; Nancy Brandt-Salmi of Grand Rapids, MN, Mary (and Roger) Jeseritz of Kerkhoven, Lorna Peterson of Willmar, Helen (and Steve) Gronli of Spicer and Betty (and Larry) Liveringhouse of Spring, TX and two nephews; Richard (and Mona) Peterson of Luverne and Jim Bengtson of Willmar, besides other relatives and friends.
Fern was preceded in death by her parents, husband in 1969, infant daughter Donna Mae in 1943, son Gary in 2007. three sisters; Viola Peterson, Florence Peterson, Eunice Bengtson and two brothers; Earl and Ernest Peterson.

To order memorial trees or send flowers to the family in memory of Fern Ristow, please visit our flower store.