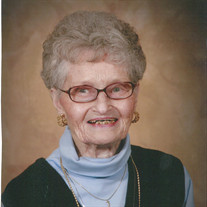 Fern Alice (Hoglund) Heglund passed away peacefully to join her Savior and Lord Jesus Christ early Saturday morning July 23, 2016. She attained the age of 98 years and 8 months and 29 days of life.

A Celebration of Life service will be held at 11 AM Wednesday, July 27, at the Living Hope Evangelical Free Church on 19th Ave. in Willmar. Visitation will be 1 hour prior to the service at the church. Interment will be in the Evergreen Cemetery near Lake Lillian. Arrangements are with Peterson Brothers Funeral Home in Willmar. (www.petersonbrothers.com)

Fern Alice Hoglund was born in the evening on October 25, 1917 at home near the town of Langford, S.D. Her parents were John and Jennie Pearl (Hays) Hoglund. She grew up on the farm, attending school and graduating from High School from Langford, S.D. At the age of 21, in 1939, she traveled to Chicago to secure employment which she found at Swedish Covenant Hospital in Chicago. There, through connections of friends, she met Willard M. Heglund from Blomkest, MN. Willard had also migrated to the Windy City in search of employment; by God's grace, Fern and Willard met at Swedish Covenant Hospital where they both worked. This was war time; the couple fell in love and married on December 26, 1942. Willard and Fern continued to make their home in Chicago where their 1st child Marguerite was born in 1947. In 1948 the lure of the family farm brought Fern and Willard back to Minnesota, where they established their small livestock farm west of Willmar. Fern worked very hard as a farm wife, cooking, baking, cleaning, gardening, and maintaining a home without modern amenities. Here, in the old farm house, 3 more children were born. In 1965, Willard and Fern entered the food business, taking over the management of Sweden House (later Freda's Bord) on west Litchfield Ave in Willmar. They operated Freda's Bord until 1991, when Willard's health began to fail. In 1998 Fern and Willard sold their farm, moved into Willmar where they enjoyed entertaining many family and friends until Willards death in 2001. In 2010 Fern moved to Bethesda Heritage Center and resided there until her death.

Fern was insistent on her children's' attendance in Sunday School at First Baptist Church. She loved the Lord at an early age and assured her family had the same strong faith. Fern loved visiting, was an avid reader, especially her Bible, she was a great cook, a marvelous seam stress, and canned many wonderful foods for her family.

She was proceeded in death by her husband Willard in 2001, a son Roger in 2010, a daughter Marguerite Peterson in 2016, a great grandson Noah Heglund in 1998, her parents John and Jennie Pearl Hoglund, two brothers and their wives, Carl (and Pat) Hoglund and Jack (and Marilyn) Hoglund, and a brother-in-law, Tom Cusick.

To order memorial trees or send flowers to the family in memory of Fern Heglund, please visit our flower store.