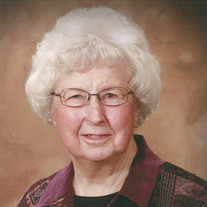 A celebration of life service will be held at 1:00 p.m. on Wednesday, January 6, at the First Baptist Church in Willmar. Interment will be at Fairview Cemetery in Willmar. Visitation will be from 5:30 p.m. to 7:30 p.m. on Tuesday, January 5, at Peterson Brothers Funeral Home in Willmar and will continue for one hour prior to the service at the church. www.petersonbrothers.com

Fern E. Fraunhofer was born on May 7, 1920, in Marceline, Missouri, the daughter of Glenn and Gladys (Sommerville) Beech. She grew up in Marceline and following graduation, Fern went to Chicago to seek employment. She worked at Revere Electric Supply Company, where she met her future husband, Louis Edward Fraunhofer. They were married on January 16, 1943.

Fern spent most of her married life in the Chicago area and became a stay at home Mom. When her kids were in grade school, Fern became a crossing guard at their elementary school. In her later working years, she became a librarian secretary at Proviso West High School.

Fern's faith and character led her to become active in her church as a volunteer, teaching Sunday School, Vacation Bible School, Pioneer Girls and Boys clubs and singing in the church choir. It was her strong faith that sustained her throughout her life, including the loss of her husband at the age of 57 and the loss of her son Roy at the age of 37.

Fern was known as the matriarch of her family and her many cousins and family members would lean on her to "fill in the blanks" to complete information. She loved family history.

After retirement, Fern moved to Grand Rapids, Michigan to help her elderly parents. In 2006, she moved to Willmar to be closer to her daughter Karen and family. She enjoyed visiting with family and friends, often serving as unofficial greeter at Sterling Manor. In 2012, Fern moved to Copperleaf facility in Willmar, where she lived until September 2015, when she moved to Bethesda Pleasant View.

She was preceded in death by her husband, Louis, in 1976; one son Roy, in 1985; her parents, brother and sister-in-law, Amos and Lois Beech, infant brother and nephew Phil Beech. May God bless the memory of Fern.

To order memorial trees or send flowers to the family in memory of Fern Fraunhofer, please visit our flower store.