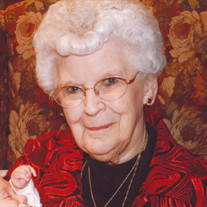 Evelyn F. Carlson, age 91, of Willmar, went to be with her Lord on Wednesday afternoon, May 24, at Rice Memorial Hospital in Willmar.

A Celebration of Life service will be held at 11:00 a.m. on Wednesday, May 31, at the Assembly of God Church in Willmar. Interment will be at Fairview Cemetery. Visitation will be one hour prior to the service at the church. In lieu of flowers, memorials are preferred.

Evelyn Frances Carlson was born on April 16, 1926, on the family farm in Meeker County, southwest of Litchfield, Minnesota, the daughter of Frans and Amanda (Bjur) Linden. She grew up and received her education in the Litchfield community. On December 24, 1944, at the Svea Lutheran parsonage, Evelyn was united in marriage to Harry W. Carlson. They moved to Willmar in July of 1946, where they had built a new house. In 1949, they purchased a farm north of Willmar, where Evelyn lived for over 51 years.

Since 1948, Evelyn has been a member of the Willmar Assembly of God Church, where she taught Sunday school and VBS for decades. Evelyn loved her Lord and Savior, Jesus Christ. She also had great affection and admiration for her family and enjoyed her many friends. Evelyn was talented in many ways, book keeping, home making, sewing, crocheting, needle work, farming, fishing and much more.

She was preceded in death by her parents and her husband, Harry on November 10, 1988.