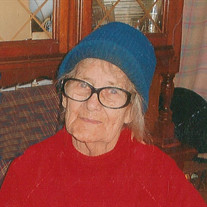 Esther Rohner, 97, of Willmar passed away unexpectedly November 13 at her home.

Her celebration of life service will be held 11 am Saturday, November 21 at Faith Lutheran Church in Spicer with Pastor Todd Nelsen officiating. Interment will be in the Long Lake Lutheran Church Cemetery of rural Spicer. Visitation will be Friday from 5-7 pm at Peterson Funeral Home in Willmar and at the church one hour prior to the service on Saturday.

Esther was born July 10, 1918, in Cosmos, Minnesota, she was the daughter of Alfred and Jennie (Jacobson) Olson. She was baptized and confirmed, and completed her education in Cosmos. In 1942, she and Myrle Rohner eloped in the middle of the night to Los Angeles, California. While living in LA, a baby girl was born to them. Shortly after, Myrle was drafted into the US Army. Esther and her newborn were relocated back to Minnesota to live with her newly widowed father. Esther's father wrote a personal letter to President Franklin D. Roosevelt requesting that Myrle be honorably discharged so he could help on the family farm. Upon getting discharged, he built a small home where they lived until they moved to Atwater, moving the house with them. While living in Atwater the couple were in the junk business and the mayor gave them permission to burn their junk model A's & model T's any day but Mondays, as that was the day laundry was hung on the lines. One day their little son Maynard wandered away, Esther was so happy when a customer brought him home. Esther had cows since she was a young girl, the cows were moved to Atwater where she milked them by hand.

In 1950 they purchased a 40 acre farmstead North of Willmar for $5,000. When they wanted to buy a $1,200 tractor for planting popcorn, the banker said, "No, Rohner you are lucky to have a roof over your head". Because Myrle and Esther had the first television set in the neighborhood they had lots of company that Esther enjoyed cooking for. Myrle and Esther founded Rohner's Auto Wrecking. Two more children were born, which completed their family.

Esther often told mesmerizing stories about her childhood and living through the depression; how she could "run like a deer". running faster than the boys, walking to country school in the winter which resulted in freezing her feet, going to dances, working for Emil Hanson Silo Company in Lake Lillian where she cooked for 500 men and got paid 50 cents a day, she told about how she overhauled her Model A, taking out the pistons and replacing the rings and gaskets. She told about how she shot in the air when people were stealing auto parts, she proudly said that she was like Annie Oakley with her rifle. She loved to yodel and sing Red River Valley. She told about her mother singing the Swedish song "Nikolina" and reading from the Bible each night. She loved talking about her father, and the great debater that he was.

Esther enjoyed making homemade donuts, bread, rosettes, cinnamon rolls and quilting when her mother-in-law came to stay. Washday was once a month for this family of eight, Esther had 2 Maytag wringer washers in the kitchen, clean clothes were a luxury. In the 60's, the family leased the Spicer Roller Rink where Esther enjoyed skating and visiting with everyone there. When their eldest son was drafted into the US Army for 13 months, Esther was heart broken and cried herself to sleep. She preferred spending time outside tending to her cows, pigs, chickens, dogs and cats. Cleaning the manure from the gutters in the barn was preferred to cleaning the house. Esther was a very hard worker and the fixer-upper in the family. After her mother-in-law passed away in 1968, she encouraged Myrle to find his real Dad who he hadn't seen for over 50 years. Esther loved visiting with people and made friends easily with her kindness and genuine interest in others.

Esther took in her brother Adolph "Ole", who lived with them for many years until his death. Also grandchildren stayed often, sometimes months at a time. She even had to learn to feed her youngest granddaughter with a gastronomy tube. She saved another granddaughter when she was being attacked by a family dog.

Esther was scared to death of water and heights, but she enjoyed crossing Lake Michigan several times on the Badger. She even flew with her son Harlan in a two-place Ultra Light so she could get a good view of her cows from the air. Every Wednesday, for years, Esther would make the best macaroni and hamburger goulash for her family and whoever else happened to be over that week. She helped to raise many of her grandchildren, spending hours with them, leaving the housework go, playing and watching tv with them.

Because Esther didn't like "new" stuff when used stuff would do, she spent hours mending socks, jeans, and anything else that had holes. She was the nurse of the family who frequently used Lysol to disinfect the injuries of her children and their friends who were injured.

Esther's favorite color was yellow, she'd always say, "yellow yellow catch a fellow". She loved flowers and had a green thumb with any type of plant. She'd love to have company stop over, even if it was only for a few minutes, she always said that a few minutes was better than nothing. She was always happy and looked on the bright side of life, she was very forgiving and said that 100 years from now it wouldn't matter anyhow. She didn't want to waste her life cleaning.

She spent the past 12 years living alone after the death of her husband Myrle. Her children would bring her dinners and spend time with her. She enjoyed it so much when they would come over at night to play card games (Rummey and King's in the Corner) with her. She enjoyed all kinds of food and never complained about anything.

We take comfort in knowing that our mother is now with her mother, her father, her husband and her son in heaven and that she lived in her own home until the last day healthy and never having to spend time in a hospital or nursing home.

To order memorial trees or send flowers to the family in memory of Esther Rohner, please visit our flower store.