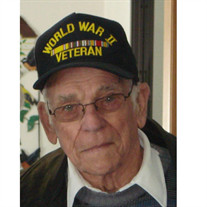 Ersie W. Quimby, age 98, of Willmar, died Monday morning, May 2, at his home in Willmar.

Memorial services will be 1 p.m. Monday, May 9, at First Presbyterian Church in Willmar with visitation one hour prior to the service. Interment will be at the Roseville Cemetery in Hawick with military honors provided by the Austin F. Hanscom American Legion Post #167 of Willmar.

Ersie Walter Quimby was born on August 20, 1917 to Walter and Blanche (Kelly) Quimby in Hines, Minnesota. He married Ruby (Brooks) Quimby on July 26, 1943. He was drafted into the U.S. Army in 1942 serving 54 months during World War II. His military service took him throughout Europe to Germany, Italy and Africa. He was a proud World War II veteran. He worked at a variety of occupations after he left military service while he and Ruby raised their family of 9 children. He helped operate and manage restaurants with his wife and retired from the Kandiyohi County Highway Department in 1979 after more than 20 years of service with the county. In retirement, he and his wife enjoyed traveling throughout many states and Canada to sight see and visit family and friends. He also enjoyed working in his large garden with his wife and kids producing many vegetables for all to enjoy. He and his wife were known for making some of the best lefse around. He was a member of the Honor Flight trip to Washington, D.C. in 2012 with a group of World War II veterans from Willmar and southern Minnesota. He was also nominated and raised the United States Flag as a World War II veteran at the Minnesota Twins game on Memorial Day in May 2014. He loved a good western and enjoyed many hours of reading. He was a member of the First Presbyterian Church in Willmar, the Willmar VFW and the Willmar American Legion.

He is survived by his nine children : Bruce (and Pam) Quimby of Willmar, Audrey (and Jerry) Pientka of Reno, NV, Steven (and Darla) Quimby of Atwater, Calvin (and Dorothy) Quimby of Spicer, David (and Kim) Quimby of Spicer, Deb (and Chuck) Grunwald of Willmar, Tim Quimby of Greendale, WI, Joel Quimby (and Bill Bergmann) of Princeton, MN, and Jody (and Terry) Fernholz of Pennock; 19 grandchildren and their spouses; and 26 great-grandchildren. He is also survived by one sister-in-law, Bernice (and John) Jacobs of Willmar; and many beloved and devoted nieces, nephews, relatives and friends.

He was preceded in death by his parents; his wife; all nine of his siblings and their spouses: four brothers, Carl (and Lillian), Don (and Elsie), Evert (and Frannie), Roy (and Joyce) and five sisters, Ruth (and Roy) Enstrom, Dorothy (and Bennie) Brooks, Doris (and Erwin) Carney, Olive (and Ed) Gorman, Beulah (and Warren) Peterson; and one infant grandson, Matthew Quimby.

To order memorial trees or send flowers to the family in memory of Ersie Quimby, please visit our flower store.