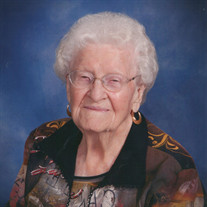 Funeral services will be held at 11:00 a.m. on Friday, August 26, at Our Lady of the Lakes Catholic Church. Interment will be in the church cemetery. Visitation will be from 5-7 p.m. with a Rosary service at 7 p.m. on Thursday, August 25, at Peterson Brothers Funeral Home in Willmar and will continue for one hour prior to the service at the church on Friday. Memorials are preferred to Rice Hospice, Our Lady of the Lakes Catholic Church or the Bethesda Chapel fund. www.petersonbrothers.com

Emma Ruth Kassa was born on September 28, 1915, near Thief River Falls, in Pennington County, Minnesota, to John and Anna (Lind) Swanson on the farm that was homesteaded by her parents. She was baptized and confirmed at the First Lutheran Church in Goodridge, Minnesota, as the 7th of 10 children. She grew up in Goodridge and graduated from Goodridge High School in 1934. Emma worked at the Post Office in Goodridge where she met Albert Kassa. They were united in marriage on April 10, 1940, at St. Bernard's Catholic Church in Thief River Falls. They farmed in Pennington County until 1951, when they moved to Myrtle Creek, Oregon. They returned to Goodridge in 1954, where Emma managed the Hartz grocery store for 25 years. In 1982, they moved to Lake Florida near Spicer and managed the Kelly Egg Farm. They subsequently moved to the Lake Plaza condominiums in downtown Spicer and enjoyed 10 years of retirement on Green Lake. After Albert's death in 2004, Emma moved to Bethesda Sunrise Village in Willmar and then into Bethesda Pleasant View in 2011.

Emma was a member of Sanders Township Homemakers, Ladies Aid of St. Anne's Catholic Church in Goodridge and the Catholic church in Myrtle Creek, Oregon. She has been a faithful member of Our Lady of the Lakes and St. Mary's Catholic Church for the past 34 years.

Emma was a prolific reader all her life and continued that love of reading by listening to books on tape after losing her eyesight from Macular Degeneration. She was also a seamstress of clothing and quilts, but her biggest enjoyment was embroidery of dishtowels, making many sets as gifts to her children and grandchildren.

She was preceded in death by her parents; her husband, Albert in 2004; a son-in-law, James Wilson; five sisters, Alice, Laura, Ethel, Mabel and Margie; three brothers, Robert, Eugene and Ernest and four nieces and nephews.

To order memorial trees or send flowers to the family in memory of Emma Kassa, please visit our flower store.