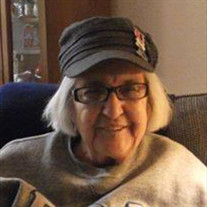 Elizabeth Suzanne "Sue" Chilton, age 91, of Spicer, died peacefully in her sleep on Wednesday, May 18, at the Glen Oaks Care Center in New London.

A celebration of Sue's life will be held on July 2 at the family's lake home on Henderson Lake. Funeral arrangements are with the Peterson Brothers Green Lake Funeral Home in Spicer.

Elizabeth Suzanne "Sue" Chilton was born in Sioux City, Iowa on January 19, 1925 to John and Elizabeth ("Betty") Schwartz. Sue lived a wonderfully full life, graduating from Sioux City Central High School in 1943, attending the University of Kansas, living in Laguna Beach, Phoenix and Las Vegas before settling down with Robert Chilton in 1957 and having three children. Sue taught in the Sioux City public schools from 1968 until her retirement in 1989, when she moved to Spicer, Minnesota where she had been a summer resident since she was born. She became a foster grandparent at the New London-Spicer High School and was known to all as "Grandma Sue". In 1994, she was the Grand Marshal of the annual Fourth of July Spicer parade, an honor that she forever treasured.

Sue is survived by her three children, Betsy Anderson (and Jan) of Coeur D'Alene, Idaho, Kate Chilton of Los Angeles, California and Bob Chilton (and Vikki) of Burleson, Texas; five grandchildren and her sister, Louise Shore of St. Louis, Missouri and Spicer, besides other relatives and friends.

To order memorial trees or send flowers to the family in memory of Elizabeth Chilton, please visit our flower store.