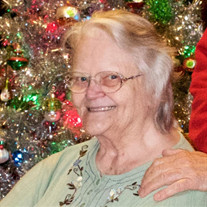 Funeral services will be held at 1:00 p.m. on Tuesday, January 24, at Cornerstone Baptist Church in Willmar. Interment will be at the Sunburg Free Lutheran Cemetery. Visitation will be from 5-7 p.m. with a time of testimony and sharing of memories at 6 p.m. on Monday, January 23, at the Peterson Brothers Funeral Home in Willmar and will continue for one hour prior to the service at the church on Tuesday.

Eleanor Mae Ruchti was born on July 30, 1937, on the family farm near Sunburg, Minnesota, the daughter of Lemoine and Sylvia (Midtun) Hanson. She grew up and received her education in the rural Sunburg community. On January 9, 1954, Eleanor was united in marriage to Edward G. Ruchti and they made their home in the Sunburg area. She worked hard as a homemaker. Eleanor was a member of Cornerstone Baptist Church. She was a Master Gardner and enjoyed spending many hours with her grandchildren in the garden. Eleanor was also a great prayer warrior, praying for family, friends, her church and the world.

She is survived by her loving husband, Edward of Sunburg; four children, Alan (and Joanie) Ruchti of Kerkhoven, Robin (and Virgil) Thompson of Sunburg, Linda (and Kent) Swanson of Brooten and Kelly (and Karen) Ruchti of Galena, Alaska; fifteen grandchildren and twenty-eight great grandchildren. Also surviving is one brother, Dennis (and Pat) Hanson of Buffalo and one sister, Diane Humphrey of Brooten, besides other relatives and friends.

She was preceded in death by her parents; two grandchildren, Lance Thompson and Morgan Ruchti; and one great granddaughter, Eden Thompson.

To order memorial trees or send flowers to the family in memory of Eleanor Ruchti, please visit our flower store.