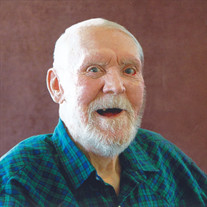 Funeral services will be held at 11:00 a.m. on Monday, Dec. 11, at Calvary Lutheran Church. Interment will be at Fairview Cemetery. Visitation will be one hour prior to the service at the church. Arrangements are with Peterson Brothers Funeral Home. www.petersonbrothers.com

Edmund Melford Quenomoen was born on March 3, 1928, in Madison, Minnesota, the son of Jul and Clara (Kesting) Quenomoen. He grew up in Madison, graduated from Madison High School in 1946 and attended Coni Electronic College in Chicago, Illinois. In 1947, Edmund enlisted in the U.S. Army and served in the Korean War. He held the rank of Sergeant and did a lot of radio work. Following his discharge in 1951, Edmund began employment with Coni Electronics for several years. He worked with and built large computers. Edmund then was employed with the Great Northern Railroad as a Track Inspector. He also owned and operated a small restaurant in Chicago for several years before moving to Minnesota to work for the City of Minneapolis Street Department. Edmund retired in the late 1980's and moved to Willmar. He was a member of Calvary Lutheran Church.

Edmund loved going to church, worshipping his God, singing, visiting with family and friends and coin collecting. He loved singing hymns with his family members on the phone when they were not with him. He enjoyed hunting, tending to his apple orchard, music and writing lyrics.

He is survived by one brother, Alvin Quenomoen of Arkansas and numerous nieces and nephews, besides other relatives and friends.

He was preceded in death by his parents; three brothers, Julius in WW II, Carl and Walter Quenomoen and three sisters, Estie Sjolie, Marie Pelton and Dorothy Kittleson.

The family wishes to express special thanks to the staff at Bethesda Grand Nursing Home and his doctors and nurses for the loving care that was given to Edmund over the years.

To order memorial trees or send flowers to the family in memory of Edmund Quenomoen, please visit our flower store.