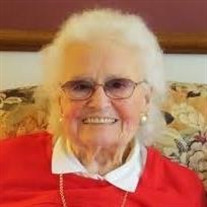 Memorial services will be 2 p.m. Friday, December 9, 2016 at Svea Evangelical Lutheran Church. Interment will be in the church cemetery. Visitation will be one hour prior to the service at the church. Arrangements are with Peterson Brothers Funeral Home in Willmar.

Dorothy "Dot" Genevieve (Caskey) Blomgren was born on February 3, 1919, in Rembrandt, Iowa, to Willis and Anna (Siefken) Caskey, the seventh of twelve children. Dot's family moved several times throughout her childhood - from towns in northern Iowa and then into west central Minnesota. She graduated from Mountain Lake High School. After high school and during World War II, she worked at Habicht's, selling women's fashions. She loved helping people, loved the people she worked with, and had many fun stories of the escapades with her friends and coworkers there.

On January 10, 1948, she married Archie Blomgren in Svea. Archie and Dot traveled to Texas to find work after they married, pulling a trailerhome. They returned to Svea after their daughter Bonni was three months old. They moved the trailerhome to the farm and lived in it until they purchased the family farm. Within a couple of years, their second daughter Carol arrived.

Following the birth of their son Gordon in 1956, Dorothy became a fierce advocate for people with special needs. In 1962, she became a founding board member of West Central Industries and was extremely proud to be a part of this organization throughout her life.

In the late 1980's, following Archie's early strokes, they moved off the family farm and into Willmar. Her husband Archie died in 1994 and her son Gordie died in 2002. In 2012, Dot moved to Steeple Point Senior Living in Osseo. She enjoyed attending the events at the facility and attending events at Osseo High School with her daughter, Bonni. She also enjoyed having her daughter, Carol, take her shopping, perm her hair and give her pedicures.

Dorothy is survived by her daughters, Bonni Hill of Maple Grove and Carol (and David) Mount of Spring Valley; six grandchildren; fifteen great-grandchildren; two sisters, Opal Holmgren of Hutchinson and Joyce Clemons of Sheridan, WY; and other relatives and friends.
She was preceded in death by her parents; her husband, Archie; her son, Gordon; two sisters, Hazel Peterson and Evelyn Hemple; and seven brothers, Raymond, Roy, Lawrence, Ernest, Richard, Harold, and Donald Caskey.

To order memorial trees or send flowers to the family in memory of Dorothy Blomgren, please visit our flower store.