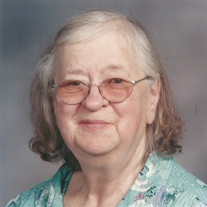 Funeral services will be held at 11:00 a.m. on Friday, April 7, at Immanuel Lutheran Church in Atwater. Visitation will be one hour prior to the service at the church. Interment will be at Ripley Cemetery in Litchfield. Arrangements are with the Peterson Brothers Atwater Funeral Home. www.petersonbrothers.com

Dorothy Minnie Anderson was born on August 19, 1925, on the family farm near Hector, Minnesota, the daughter of Johann and Ida (Schultz) Buehler. She grew up and received her education in the rural Hector community. Dorothy married Carl E. Anderson and they made their home in Litchfield and was employed at the Jenni-O Foods in Litchfield. In 1951, they moved to Carl's families dairy farm near Grove City. Dorothy worked hard as a homemaker and farmer. She was a past member of St. Paul's Lutheran Church in Litchfield and a current member of Immanuel Lutheran Church in Atwater. She enjoyed sewing, gardening, cooking and baking.

She is survived by her four children, Janice (and Allen) Clausen of Plymouth, Sharon Anderson of Litchfield, Douglas Anderson of Grove City and Donald (and Kristy) Anderson of Atwater; four grandchildren, Jennie, Jason, Tori and Jayden; and two great grandchildren, besides other relatives and friends.

She was preceded in death by her parents; her husband, Carl in 1988; and three brothers.

To order memorial trees or send flowers to the family in memory of Dorothy Anderson, please visit our flower store.