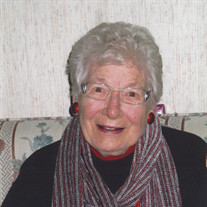 Funeral services will be 11 a.m. Tuesday, December 19, at Rosendale United Methodist Church in rural Atwater. Interment will be at Union Cemetery in Atwater. Visitation will be5-7 p.m. Monday, December 18, at Peterson Brothers Atwater Funeral Home in Atwater and will continue one hour prior to the service at the church on Tuesday. Memorials are preferred to Rice Hospice, Atwater Area Help for Seniors, or Rosendale United Methodist Church.

Doris Irene Hanson was born January 8, 1922, on the family farm near Raymond, Minnesota, the daughter of Arthur and Esther (Pederson) Myers. She grew up and attended country school in the rural Raymond community. Doris worked as a housekeeper in the Raymond area before attending beauty school in Minneapolis. She later owned and operated her own beauty shop in Willmar. On May 29, 1953, she married William G. Hanson in Raymond. They lived and farmed in the Svea area and later in the Atwater area for many years. In 1992, Doris moved into Atwater and had resided at Sunnyview since July 2016.

Doris was a member of Rosendale United Methodist Church, where she was involved with prayer group and Ladies Aid, and created the flower arrangement for the church. She was also a member of the Green Thumb Garden Club. She passed along her love of gardening to her daughters. Doris also enjoyed cross-stitch and embroidery, and made a set of dishtowels for all of her grandchildren.

She was preceded in death by her parents; her husband: William Hanson in 1988; a son, Jimmy Hanson in 1994; two brothers: LeRoy Myers and Glenn Myers; a sister: Neva Olsen; brothers-in-law: Leonard Hanson and Howard Hanson; and a sister-in-law: Rose Krueth.

To order memorial trees or send flowers to the family in memory of Doris Hanson, please visit our flower store.